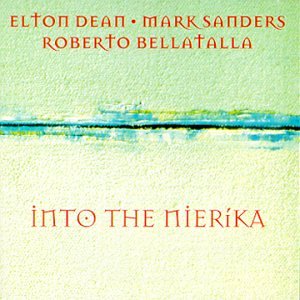 Into the Nierika is saxophonist Elton Dean's first trio album with drummer Mark Sanders and Italian bassist Roberto Bellatalla. Sanders has a resumé which extends from his work in Dean's re-incarnated version of the big band Ninesense (entitled, "Newsense") as well as stints with Elton on albums with Howard Riley, and the acclaimed, QED (which also featured Bellatalla). Bellatalla has a twenty-year plus tenure in the UK improvising music scene playing with Keith Tippett (in Dreamtime), Paul Dunmall, Don Cherry, and drummer Louis Moholo. The album is divided into three pieces, the first excursion is entitled "Following Through" and it's a doozy. Dean begins the conversation with Bellatalla driving the tempo in the distance. Sanders comes in after a minute or so of injecting a few contrary pulses. By the time group gets mid-way through their friendly discussion, Dean has dropped in and out several times leaving room for solo drum chops. "To Rahel and Back" is the second track and the most mysterious of the three pieces. It succeeds to build interest through Dean's moody introduction that transcends into a linear dialogue. "Growing the Light" is the album's closer and it exhibits a different development as the trio focuses on textural backdrop. What makes this disc different than noisy works such as "If Dubois Only Knew," is that the interplay is careful and under some control. No rhythmic center can lead to chaos in my book and then to my trusty bottle of Tylenol.