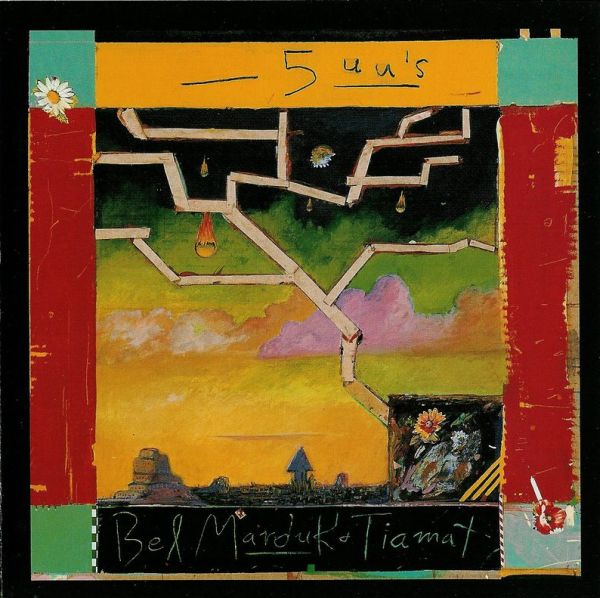 From the beginning, led by drummer Dave Kerman, 5uu's started out as the west-coast answer to the European RIO music of the day. Their first mini-album Bel Marduk & Tiamat echoes that more challenging and complex musical ethic from a point far outside the progressive mainstream. One might consider their music "experimental," but in fact its elemental constructs are essentially the same as any other progressive rock type music: odd rhythms, unusual time signatures, oblique melodies, conceptual lyrics. The differences are primarily in the arrangements, which can be extremely sparse (intentionally so) using atypical combinations of the basic instruments (two guitars, piano, bass, drums) in even more unusual ways, and in the vocals, sung by Curt Wilson, which tend to harbor a more punky, aggressive attitude a-la Talking Heads. A year later the band would release a single "Misery Loves Company" / "Hot and Cold Frog," which introduces sax player Lynn Johnston (from the Motor Totemist Guild, another LA RIO influenced band with a more modern classical approach), adding a whole new dimension to the 5uu's sound, and providing the seed that would grow into the band's future endeavors.

The next 5uu's album Elements would in fact be a full collaboration with the MTG, with members of both bands playing throughout, resulting in flute, cello, sax, vibes, and various other instruments being integrated into their sound, but the majority of the compositions were still written by Kerman. It also marks the addition of full-time keyboardist Sanjay Kumar. Wilson's vocals take on a less aggressive stance to fit the more tempered nature of the new 5uu's style, with liberal use of multi-part harmonies — one may even be reminded of Godley & Creme or early 10cc at times. Overall, Elements is a far more mature and satisfying work than their first, relying more on instrumental savvy and less on gimmickry, moving the band into a more unique style away from their more typically styled RIO beginnings. One more song, the haunting "Carousel of Progress," would be recorded in '87 for one of the RéR Quarterly releases by the 5uu's proper (without MTG involvement) before their long recording hiatus, which officialy ended in 1990 when 5uu's and MTG joined to become U Totem.

Cuneiform has reissued all of this early 5uu's material on the single CD release Point of Views, including the single and the RéR Quarterly track, all available for the first time in digital format. For those who only know the latest 'trio' version of 5uu's that released Hunger's Teeth in '94 and the ensuing tours, these early works are very different, and show the band in their more formative years with a wider palette of ideas. In all an excellent release that I'm sure most would enjoy.

Tipographica - Tipographica – The Japanese progressive rock scene in the 90s in general has taken a remarkable turn towards a more innovative and unique styling. In the latter half of the 80s, the Japanese focus was on the more...  (1994) » Read more