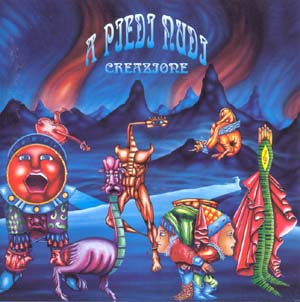 Ah yes, echoes of the great ones! This, A Piedi Nudi's second album (unless there are others the writer doesn't know about) is a giant step in the right direction. Having been only moderately impressed by the first, it was still a very respectable debut, but not one that would prepare a listener for this sort of follow-up. A Piedi Nudi's power is not necessarily in blazing new trails, but more in assimilating and developing influences (mostly from the Italian classic period '70-'76) and refining them. The influences are many and well disguised, but the ghost of Il Balletto di Bronzo's Ys comes out of the mix with fleeting regularity. All the better. A five piece of drums/flute, guitar, bass, keyboards, and French horn, the drummer is also the lead vocalist – and a very capable singer he is. With a mix of instruments like this and five guys that play them so well, this is clearly a group effort with no one musician standing out among them, yet at the energy level they play, all stand out. Hard driving Hammond organ, crunchy soaring metallic guitars (yet not as hard as last time...), plenty of compositional twists and turns, dynamic extremes, touches of folk, a riveting pace, busy drums – enough to keep even the most hard-to-please prog fan interested, yet accessible enough that most will surely enjoy.