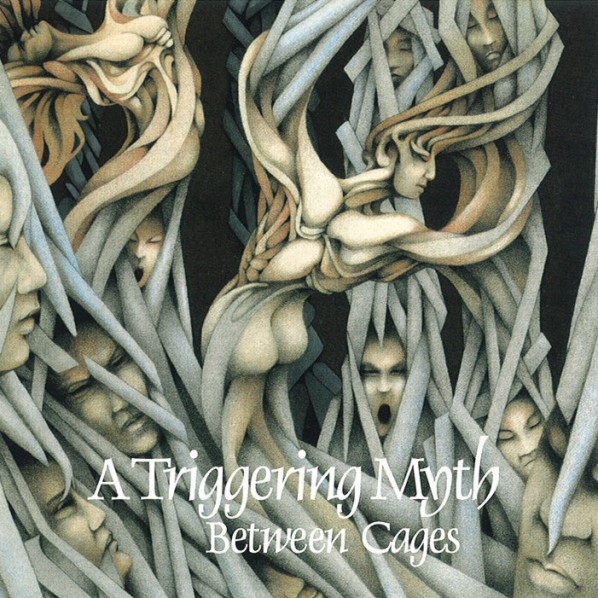 A Triggering Myth continues to be Tim Drumheller and Rick Eddy. So says the liner notes of this, their third album. Hailing from Massachusetts, the duo also continues to make music much the same as their first two albums. Plenty of light, busy keyboards, programmed percussion and some secondary guitar counterpoint. The music is rhythmically very deliberate, always rolling along and moving forward fluidly. Melodies seem laid on top of this foundation on an as-needed basis. In many ways, this music feels like a Kit Watkins release, but with a bit less strength in chord progression and melody. Several guests appear, giving the album more of a band feel than a pure duo. Of interest are the live guitarist and drummer who appear on the Demetrios Stratos tribute track "Il Voce," which features a whirling middle-eastern riff that harkens the glory days of Area. Of course the musicianship here is less than the mighty Area, but it's still one of the finest moments on this disc. The title suite closes the album out nicely, but when all is said and done, one can't help wishing these guys would just go all out and cut loose for once. This is a fine album, but could have been even better if they would occasionally turn up the heat. If you've enjoyed their previous two efforts, Between Cages will certainly not disappoint.

The third release from A Triggering Myth continues to showcase the talents of Tim Drumheller and Rick Eddy. Both are apparently keyboard players foremost, but between them, they manage to cover most of the other instrumentation on the album too. This is good and bad. By the sounds of things, these two individuals work well together and their focus comes across well in their compositions. The off-beat, syncopated rhythms of "Habile" could be described as the sonic equivalent of a Reese's collision between Gentle Giant and Frank Zappa. "Squdge" and "Deftly Dodging" both offer some very nice jazzy piano parts. There's a lot a keyboard variety on this album, usually with at least two keyboards parts at any given time. All of that is good. The bad is that there are too many musical sections that are either exclusively keys, or so heavily dominated by them that the other instruments get lost. The tribute song to late Area vocalist Demetrios Stratos, "Il Voce," is the best track on the album — the primary reason being that it achieves a great balance between all the instruments. (It's actually a cool song as well.) It is the only track on the album that was recorded "live" and it features a guest drummer and guitarist that really add a lot to the arrangement. It sounds like a band playing off of each other. While many of the other songs have guitar and drum parts, in many instances, it sounds as if those parts were added as an afterthought. There are several spots that cry out for a wailing guitar solo, but unfortunately, there aren't too many of them. With their solid playing and songwriting abilities, the addition of a full time lead guitar player and drummer could launch A Triggering Myth to the next level.

This is the third outing for the keyboard propelled duo of Rick Eddy and Tim Drumheller, collectively known as A Triggering Myth. For anyone familiar with their previous two efforts (a self-titled debut in 1990 and Twice Bitten from 1993), this is clearly their boldest step forward, combining a new found energy with their most cohesive compositions yet. For those still uninitiated, the duo plays a subtle progressive rock dominated by synths, piano, and other keyboards — with elements of neo-classical and jazz flowing freely to the surface. An element of compositional complexity hides behind the apparent simplicity and pastel colorations that pervade most of the album's six tracks. In some ways, their music could be compared to some of Kit Watkins' work, or something like Lanz and Speer's Desert Vision; yet another side of the ATM sound is quite adventurous, as exemplified on tracks like "Squdge" and "Midiots, Vidiots, and the Digitally Delayed," where the synths are used to create exotic percussive sounds. Both guys are mainly keyboardists, though Eddy injects some tasteful guitar licks into most of the songs, and a guest guitarist contributes on one track. Two guest drummers handle the kit, though drums are almost an incidental part of the overall schema — used only where necessary to highlight what the keyboards are doing. It would probably be to their benefit to use more bottom-end, grand dynamics, and raw rhythmic power, in fact it is precisely that which prevents their otherwise-excellent twenty-two minute title opus from really soaring to stratospheric heights. Such is not the case with "Il Voce," an outstanding tribute to Demetrios Stratos — primarily because drums and guitar are an integral part of the composition, not added as embellishments for the keyboards. Despite this, most will find this latest offering from A Triggering Myth both spirited and energized, clearly their best to date.

Univeria Zekt - The Unnamables – A Magma album in disguise, The Unnamables was designed to ease listeners into the musical world of Magma. Recorded by essentially the same lineup as on 1001 Centigrades, the album basically reiterates...  (1995) » Read more

I Numi - Alpha Ralpha Boulevard – Probably the only thing interesting about this album is that the cover is a photo by Nagel. Everything else is typically average beat / psych rock heavily influenced by the Beatles. Lots of short...  (1995) » Read more

Hampton Grease Band - Music to Eat – The "Hampton," of course, refers to the venerable Bruce Hampton, best known for his 90s rock / jazz / funk outfit, the Aquarium Rescue Unit. But back in the early 70s, Hampton was the...  (1996) » Read more

Yanggeum at the Speed of Light