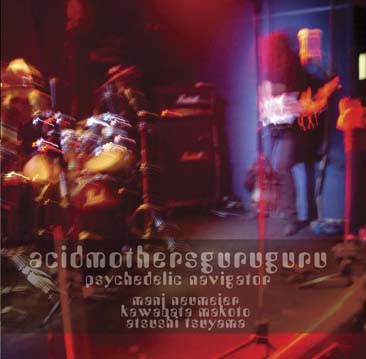 Here we have a brand spanking new full length album from Acid Mothers Temple featuring their recent addition of female vocalist Kitagawa Hao. AMT front man Kawabata Makoto claims, half-jokingly, that this new release has the "cleanest sound in AMT history!" From my perspective I cannot tell if this is true, because as soon as you press PLAY you are assaulted by a cacophonous wall of screaming guitars and electronics that barrage your senses, frying all synapses. Most people would immediately punch the OFF button. But if you wait it out you will be rewarded. The first track "Pussy Head Man from Outer Space" eventually shows a semblance of structure amid all the chaos. The second track, "Crystal Rainbow Pyramid," is a bit saner, but sounds like Alvin and the Chipmunks on acid jamming with AMT. And the album closes with the tour de force "Electric Psilocybin Flashback," lasting a mere 40 minutes. This track combines elements of Hawkwind with AMT's signature sounds and is deserving of high praise. Forget the first two tracks, "Electric Psilocybin Flashback" is the bomb, to paraphrase Randy Jackson. Ranging from beautiful quiet acoustic interludes to insane sonic assaults, this song will transport you unlike any other AMT track. And don't be put off by the 40 minutes. The music is so good that you barely notice the passage of time. This CD is a bit uneven, but well worth investigating.

When Mani Neumeier (Guru Guru) was touring Japan in March 2006 he got together with Kawabata Makoto and Atsushi Tsuyama (Acid Mothers Temple) in Nagoya for a spontaneous jam session. It was clear from the beginning that there was a special magic with this pairing of young and old psychedelic freaks. So much so that they planned a Japanese tour and recorded this album of five songs, four originals plus the Guru Guru classic "Bo Diddley." I am a sucker for the Acid Mothers Temple and all of their incarnations, but the sheer energy and sonic assault of this Japanese powerhouse can be offputting. You have to be in the right mood to give one of their discs a spin. But the pairing of Krautrock and AMT confers Psychedelicnavigator with a more structured approach to AMT's psychedelic music. Mani's drumming is as fresh as ever, even after nearly 40 years in the industry, keeping the band focused throughout the disc. Absent is AMT's signature bombardment of electronics and effects; instead we have a trio of drums, guitar, and bass. Makoto and Tsuyama grew up listening to and worshiping Guru Guru and their playing here is homage to Neumeier, Trepte, and Gingrich. Recorded in front of a small live audience, Psychedelicnavigator recaptures that early 70s spirit and combines it with fiery new ideas of mutual admiration. This is one release that consistently fires on all cylinders and is sure to please fans of either band.

Iconoclasta - Live in France – Is it amazing that the Mexican band Iconoclasta is still around? Yes, but on the other hand with the passion founder member Riccardo Moreno shows to keep the torch of prog rock in Mexico burning, it's...  (2004) » Read more