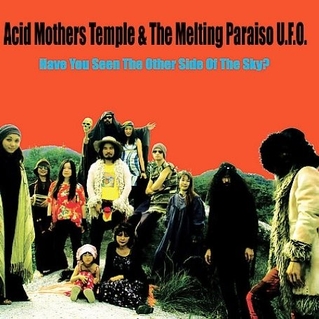 Makoto Kawabata and his band of madmen have been recording as Acid Mothers Temple for several years and their catalog is enormous. Many of their releases are long, unlistenable, cacophonous assaults. But occasionally one or two gems find their way across the Pacific to our shores. Such is the case with their latest release Have You Seen the Other Side of the Sky? This new CD contains six songs recorded between May 2005 and February 2006, just in time for their 2006 US tour. The first song, “Attack from Planet Hattifatteners,” is a typical Acid Mothers sonic attack on your senses and runs about six minutes. The others are sedate, melodic, and listenable. “Buy the Moon of Jupiter” is reminiscent of Can and Damo Suzuki’s vocals. “Asimo’s Naked Breakfast: Rice and Shine” bears the stamp of Amon Düül II’s Dance of the Lemmings and other Krautrock influences. “I Wanna Be Your Bicycle Saddle” picks up the sonic assault again for 1½ minutes, followed by the bucolic “Interplanetary Love.” The CD closes with “The Tales of Solar Sail – Dark Stars in the Dazzling Sky,” a beautiful acoustic flute driven dance in the starlight, which after five minutes shifts to powerful guitar-driven jam overlain with electronics and chanting that continues for the next 25 minutes!

Wendy Carlos - Switched-On Bach & The Well-Tempered Synthesizer – Given the limitations of the synthesizers available in 1968, the choice of Bach as a focus for Wendy Carlos’s pioneering recordings makes perfect sense: the instruments could play only one note...  (2002) » Read more