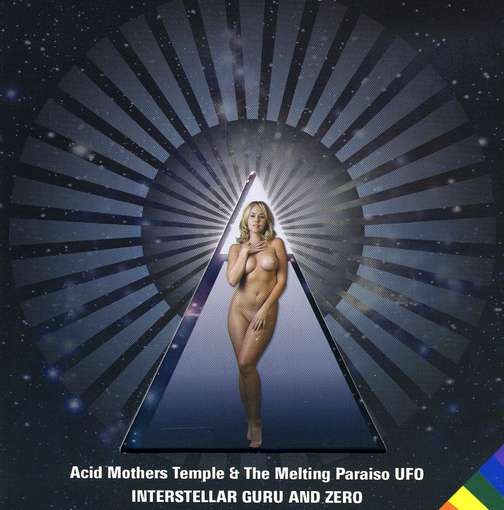 I find it extremely challenging to keep up with this prolific band with their myriad lineups and bazillions of releases. This time around, the band is Tsuyama Atsushi (monster bass, tortoiseshell guitar, voice, and cosmic joker), Koji Shimura (drums, and latino cool), Higashi Hiroshi (synthesizer and dancing king), and Kawabata Makoto (guitar, acoustic guitar, sitar, voice, RDS900, synthesizer, organ, tape-loop, and speed guru). Interstellar Guru and Zero contains two lengthy tracks: “Astral Projection from Holy Shangrila” at 21:06 and the title track at 39:02. “Astral Projection” begins with a looped vocal repetition like Nurse with Wound’s “Rocket Morton” that eventually morphs into Acid Mothers Temple’s signature cacophonous psychedelic freak-out of guitars and synths, and then tails off sedately with four minutes of ambient acoustic strumming. The title track is by far the better of the two. It is a floating ambient masterpiece with slowly evolving looped chords and electronics. After about 12 minutes drums tentatively enter to add interest to the mix only to slip away after a few minutes. The drums eventually return along with Kawabata’s guitar, and both are amazingly understated for this band. I am not a fan of their chaotic pushing of the sonic limits, so I find Interstellar Guru and Zero to be a wonderful interlude in an otherwise frenzied assault on the senses. Most likely diehard AMT fans will not go for this release, but it does demonstrate that Kawabata and his mates can embrace other musical styles in this genre.