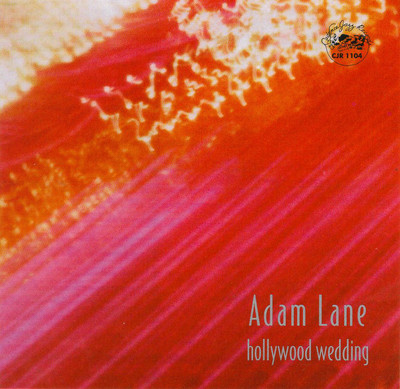 Adam Lane is an improvising artist local to San Francisco who happens to use the upright four string as his medium to create with. On his 1999 Cadence release, Hollywood Wedding, the ramrod composer engages several disturbing, somewhat political modes across ten tracks. From the tribute opener to the deceased leader of Israel, Yitzhak Rabin (“Monolith”) to “Peace” (Wadada Leo Smith), Lane’s spectrum of composition ranges from the tortured to the sublime. But it’s all under control with smooth transitions, which indicate subtlety and maturity for this initial outing as a leader from California. Despite various combinations of players, the ensemble playing is collectively inspired and cohesive. Lane’s own use of walky talkies, distortion (courtesy of guitarist Ryan Francesconi) and sampled radio is an inventive, clever use of environmental elements (more prominent in the work of other artists such as Holger Czukay). But don’t pigeonhole the composer there, “Dedicated” or “Blues for Richard Davis” are more standard workouts (at least from the first few bars). Overall the release is not unlike the freer endeavors of Elton Dean’s quartets or Cuneiform’s acclaimed release from Paul Dunmall, Bebop Stardust. The album fits nicely in with the best of British jazz and beyond: the smell of Canterbury is all over the disc and it’s all the better for it. There are three prime cuts on the album including the ten minute opening piece, which contains a spirited blow from trumpeter, Todd M. Simon across a slow groove tempo. This album should appeal to big band aficionados as well as adventurous souls in search of vanguard recordings.

Nexus - Perpetuum Karma – This Argentine symphonic band made a big splash back around the turn of the decade, fronted by beautiful lead singer with golden voice, Mariela Gonzalez, leading to invitations to Baja and NEARfest....  (2008) » Read more