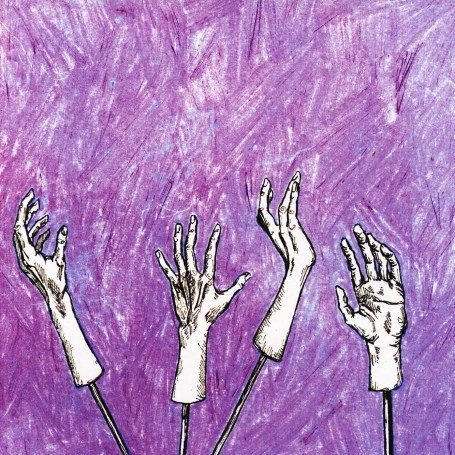 Somebody call the men in white suits – these guys are insane. On second thought, don’t call anyone – treatment may decrease their capacity to create such marvelously insane stuff as this. I reviewed two previous Ahleuchatistas releases last issue, and you can refer to that to see how much their brand of ridiculously complex post-punk art-freak lunatic rock appeals to me. Suffice to say this release is more of the same, only better. One thing that strikes me about it is the unusual construction of several of the pieces. In addition to the tightly coordinated style they’ve developed in the past, there’s an element I don’t remember. On the first track, “Remember Rumsfeld at Abu Ghraib”, the guitar plays a slow succession of notes, and at seemingly irregular intervals, the bass and drums interrupt with unrelated complicated rhythmic outbursts of increasing frequency, leading into a section where all three work together. Observation: while most rock music has some detectable relation to the blues, however remote, this has absolutely none, and no elements of European classical, jazz, folk, or anything else, for that matter. It’s like the monstrous offspring of generations of caffeine addicts who suffered from Attention Deficit Hyperactivity Disorder. They can’t stay with anything very long, even a consistent beat. A few seconds of sixteenth notes are followed by triplets at a different speed; a barrage of atonal stuttering succumbs to a lyrical bit with tinkling cymbals. For me, this is endlessly fascinating music, and I endorse it heartily.

Alonso Arreloa / LabA - Música Horizontal – One of the big surprises of Baja 2008, Alonso Arreola and his band/project LabA tore up the opening slot at the theater on the first night with his funky 8-string bass maneuverings and avant-garde...  (2008) » Read more