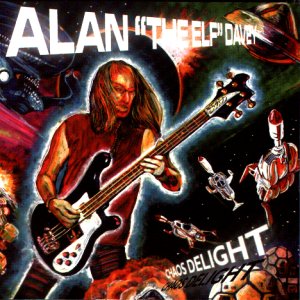 Alan “The Elf” Davey offers up his second solo outing. Like Dave Brock, the former Hawkwind bass player prefers to do it all himself; so you’ve got all instruments, engineering, mixing and production done by Alan. Which can be good if the artist has got something. I didn’t think Chaos Delight quite lived up to its potential. The album cover has non-licensed reproductions of Star Trek’s Enterprise (altered a bit) and the Borg cube. Space 1999’s Eagle One. And the UFOs from mother of all classic sci-fi show’s UFO. You also get an 11 page comic called Chaos Realm with some great artwork by Stefano Scagni. With all that and songs titles like "Sci-Fi Delic," "Theme from UFO," and "Eagle Alpha," I was really hoping for a great album. Almost. "Sci-Fi Delic" is a pretty hard rockin’ tune; Alan has always been a fantastic bass player and it’s that bass that drives this album. His guitar playing is good as well, though he does sound a bit like his old band. The drum playing is fairly simple, keep-the-beat type stuff; some drums sound real, some programmed. But it’s his liberal use of synthesizer that really keeps things spacey, lots of swirling effect type noises. Sadly I don’t recall the theme song very well from UFO, but it rocks. I guess fans of Hawkwind should like this, the riffs are all built over a fairly repetitive rhythm, and while it has its moments, it’s a bit simple and too repetitive.

Hidria Spacefolk - Symbiosis – I’m not going to compare Hidria Spacefolk to Ozric Tentacles – I’d rather listen to Symbiosis again (well, so much for that plan). Anyway, I’m happy to report that Space Rock is alive and...  (2003) » Read more