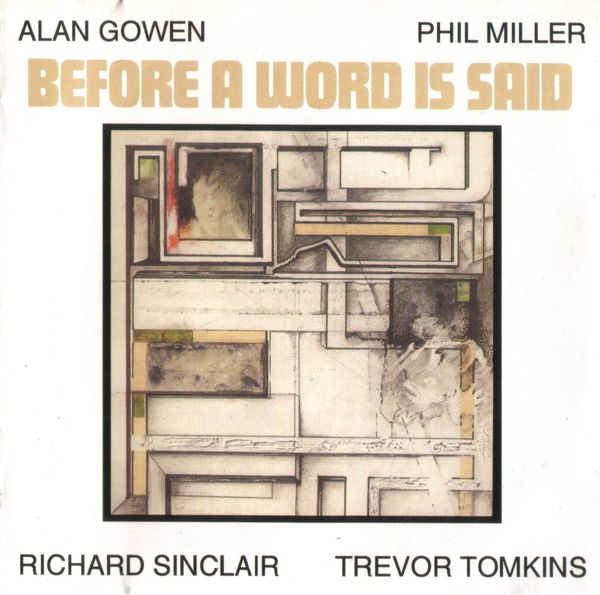 For those of you still unfamiliar with the Canterbury musical legacy, Alan Gowen, a keyboardist of some renown, died of leukemia in 1981. In his short career, he notched up quite a few noteworthy albums as well as establishing a reputation for creating subtly complex jazz arrangements during the 70s British music scene. Before a Word Is Said is one of Gowen's greatly overlooked projects which could have very easily obtained some notoriety from a release on some major European jazz label. Instead the album has been secretly awaiting a chance to be rediscovered among the catalog of gems found in the archives of semi-lost modern music. During sessions for the album, Gowen soldiered on to complete this joint writing task with Phil Miller despite waning health and chemotherapy treatment. But make no mistake, his chops were quite intact, helping to make this disc very much a classic album of the period, comparable to National Health's D.S. Al Coda. Contributors on the project were Miller (guitars), Richard Sinclair (bass, vocal), and Trevor Tompkins (drums). One of the key highlights is Alan's performance throughout the album – he's very fluid, his soloing founded almost instinctively in the context of the half-improvised pieces rather than relying completely on written notation. There is prominent use of Minimoogs, which are played in a subtly understated style which works great to achieve some balance between the instrumentation. In addition, Sinclair comes off as standout bassist, particularly on the somber piece, "Nowadays a Silhouette," where he gets takes an uncharacteristically 'wobbly' solo using his trusty Wal bass. In addition, Richard's track, "Umbrellas" has a meandering scat vocal approach which he excels with. The two remaining pieces of note are "Silver Star" and "Before a Word Is Said." "Silver Star" is one of Phil's Miller's short songs which contains his short bursts of angular guitar playing. The title track seems to be Gowen's portrait of a slow, creepy walk through a dreary day schoolyard where background children's voices are overheard in the distance – very reflective. New liner notes are provided by Phil Miller as a reminiscence on the recording of the album which Alan never heard in finished form. There is also written insert which chronicles his engaging ten year career. Hopefully Voiceprint is checking into further possibilities for releasing other excellent albums of this caliber, lost in limbo awaiting rediscovery.