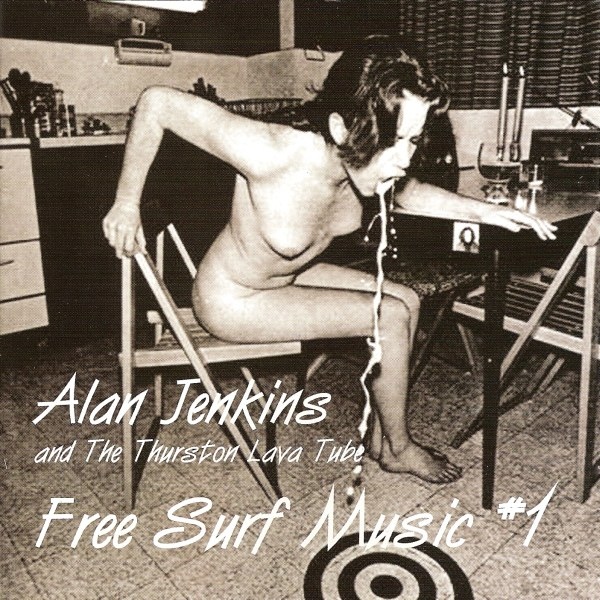 The idea of “experimental surf music” might seem odd, even contradictory, at first thought, but a little consideration should revise that assessment. A lot of the famous surf tunes of the 60s were actually groundbreaking: “Pipeline,” “Wipeout,” and even “Walk Don’t Run” introduced listeners to instrumental sounds they weren’t necessarily hearing in vocal music at the time. And there’s always been an element of musical stretching in the best surf music, usually on the part of acrobatic guitar playing. So Alan Jackson and The Thurston Lava Tube can take surf rock, douse it in psychedelia, and twist it around with some wackiness and tinges of avant-garde, and it all makes sense. Sometimes twisted sense, but never does it sound like an inappropriate use of fun. The NSFW front cover seems calculated to make some listeners uncomfortable, and some of the titles couldn’t legally be announced on the radio, but the music is solid, conceived with an eye on the classics of the genre (and other genres as well), but never fussy and over-arranged. There’s a refreshing looseness to the proceedings, as if a group of friends just got together to jam on some melodies. This CD collects the band’s first two albums together with the Pour Quoi Pas Moo EP, a total of 40 tracks and something like 77 minutes.

There’s a Zappa-esque air of absurd humor running through many of the tracks, from such titles as “Gargling with Shelves,” “Chewing Gum for the Spine,” “I Was a Teenage Camel,” “The Minister of Statues Is Getting out of His Bath to Speak,” and many more. Musically, we have the basic surf rock band of twangy guitar, bass, and drums, with keyboards (mostly combo organ) and frequent saxophone. There are some vocal interjections, and lots of sound effects and freaky bits — clearly the most relevant phase of Zappa’s career is the Freak Out! era, where popular forms are modified by avant-garde processes. And it’s not all fetishistically retro — there are some more modern touches, including the occasional synthesizer or drum machine, but you weren’t expecting a history lesson, were you? In among the original tunes is a telling cover : “Lumpy Gravy.” Many of the originals have strong echoes of famous instrumental tunes, but this game of spot-the-reference is smile-inducing rather than cringeworthy, eye-winking good fun rather than a lack of creativity. Welcome to the Art School Beach Party, and prepare to twist to the house band playing “Godzilla, Queen of the Desert”!

Kenziner - Timescape – Remember when a "shredding" guitar player was the exception? Seems you can't turn around these days without knocking one over. Kenziner is another one of these small-label guitar bands. The focus is...  (1999) » Read more