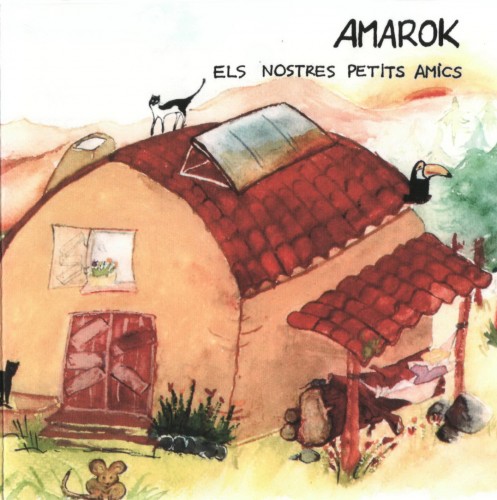 Hailing from the Basque country in northern Spain, Amarok is essentially keyboardist Robert Santamana and a rotating cast of other musicians on Spanish guitars, violin, oboe, and percussion, including vocalist Lídia Cerón. The music here is gentle and melodic, carried forward mostly my the multi-layered keys and Lídia's ethereal and spirited voice, touched with a subtle yet direct energy that tends to place the music somewhere between the folk-prog of Eris Pluvia, the spiritual aspects of Popol Vuh, and perhaps some of the artists in the electronic axis, albeit with a distinct ethnic flavor, always present but never overstated. The standout here is the nine minute, six-part "Somiedo," which winds through several themes, scaling the energy ladder with warmth and passion. The album flows well, alternating between vocal pieces and the quieter melodic keyboard pieces. For some this may be too subtle and indirect, taking the more low key approach rhythmically, while heightening the melodic intensity. Still, armed with that knowledge and knowing what to expect, I think most would enjoy this one a lot. As an aside, the album was produced entirely using photovoltaic (solar) electricity, to my knowledge the first of its kind.

Rush - Snakes and Arrows – When a short audio sample of "Far Cry" was posted on Rush's web site it led to excited and hopeful premonitions of a return to the kind of prog rock the Canadian trio had pioneered on...  (2008) » Read more