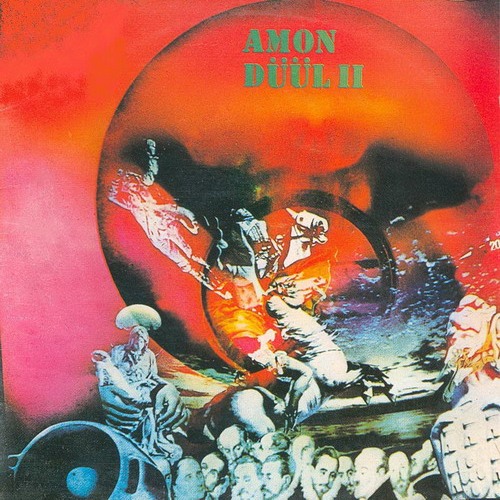 When I started getting into progressive music in my teens, this album could actually be found fairly frequently in record stores, but unfortunately it usually was found on (US) UA vinyl (the Liberty original was a lot rarer), which always sounded horrendous to my ears. It probably delayed my appreciation for early Hawkwind for years, if in part due to some of the scratchy copies out there. Anyway it wasn't really until I got to hear Yeti and Phallus Dei, probably in their Mantra CD incarnations, where this one clicked into place for me. In some ways this was a way of taking the double album format of Yeti and focusing up the sound and narrowing the scope a bit. It was still a heavy psychedelic piece of music, but it wasn't as lavished with as much reverb and echo as its two predecessors. But like those, one of the reasons ADII was so powerful and alluring is that the band was just brilliant at writing guitar riffs, and often long ones at that. So in many ways it was kind of like they started focusing on the first two sides of the Yeti release, taking those riffs and honing them into a slightly more song-based format that they'd carry forward on Carnival in Babylon and Wolf City, although at this point the suites were still often album side length. As a result the band ended up creating what would be one of their most popular releases. I'm not sure anyone else really sounded close to Amon Düül II, with those riffs, the violin, Renate's wild voice, the primal drumming, the massive use of sonic effects and studio trickery, the feeling that there were absolutely no limits. The album was so deep that even after dozens of listens, it still manages to sound somewhat new with every play (this isn't one to judge on a first, second, or even third listen...). And who can forget the song titles, the poetry of "Syntelman's March of the Roaring Seventies," "The Marilyn Monroe-Memorial-Church" and "Toxicological Whispering."

Various Artists - Kings' Boards – This compilation disc features a single cut from each of five budding young Japanese synthesists, who are backed by various members of White Fang, Seilane, and Social Tension. The backing support is...  (1994) » Read more