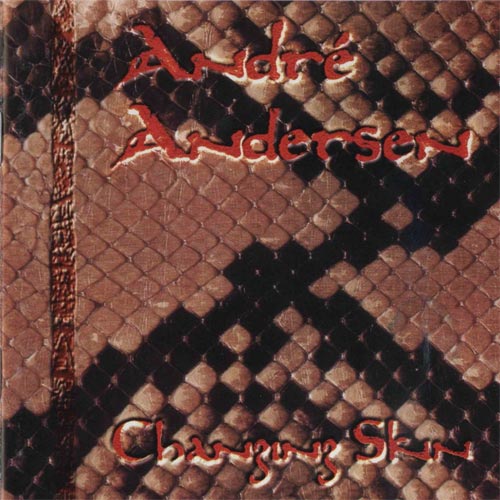 Anderson is the keyboardist of Royal Hunt, a progressive metal band from Denmark that released the album Paradox on Magna Carta a couple years ago (and four more on other labels before that). The songs on Changing Skin could best be described as keyboard driven symphonic metal-ballad, with a powerful vocalist in Kenny Lübcke, coming at you front and center with a nod to Coverdale era Purple. With anthemic power ballads like "A Thousand Miles Away" and "In My Arms" regularly punctuating the song sequence, no singular stylistic tendency becomes overbearing — though the ballads add a far more commercial slant to the proceedings that is reminiscent of MTV bands of the early to mid-80s (no judgement here, there are many out there who really dig that stuff, and obviously Andersen is one). The keyboard sound is heavily synth dominated; one will hear very little piano — only occasional synth piano patches, and very occasional organ. The drumming is straight ahead, heavily gated / processed (or maybe even sampled and programmed a-la early Magellan). Guitars are provided by a number of different players, including Royal Hunt mate Jacob Kjaer. Andersen's compositions and arrangements are quite good, but tend be 'safe' and stay well within the confines of the subgenre, reinforced by Lübcke's voice (often multi-tracked to get that 'big' sound). While the musicianship and writing here are top notch (for the market they aim to reach), this writer found it to be a little too safe and commercially oriented. Your mileage may vary.

Djam Karet - Collaborator – Having followed this band since their 1987 cassette release The Ritual Continues, I've always felt that their strongest suit was their ability to create atmospheres, emotional sonic textures that...  (1994) » Read more