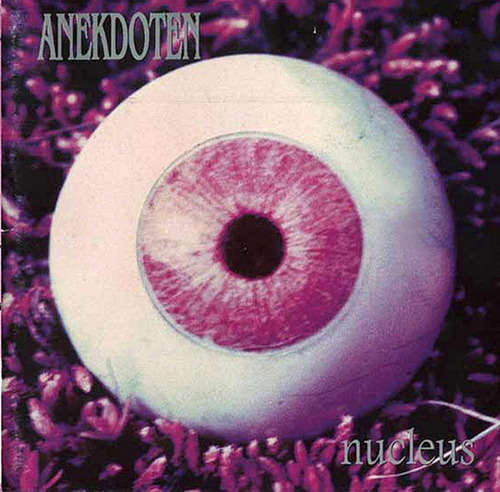 Especially after great shows at a couple of the Monster Prog shows in the last year or so, Anekdoten's follow up to the much heralded Vemod has surely been one of the most anticipated prog releases of the year. In short, it was worth the wait. Nucleus has all the ingredients that made the first album a prog hit, plus loads of new stuff. If I had any complaint about the first album, it was that it was too samey in places and had a tad too much King Crimson influence. The band has matured on Nucleus and added several new elements to their sound. The songs are still primarily instrumental based, but the writing has more variety . Guitarist Niklas Berg proves he is not just a master of the tritone. By expanding his repertoire, varying his guitar style and tones quite a lot, he helps adds some textural diversity absent on Vemod. In addition, he has also expanded to add Zeppelin-esque electric piano to some of the tracks for even more variety. The production quality is much higher on this release too. Anekdoten are great at what they do. They can build parts and tear them back down like nobody's business. I'm sure I don't even need to tell you to get it.

Anekdoten seems to be one of the most well received groups of the new "progressive" resurgence. Their debut has evidently reached the five-digit sales mark and was given wide critical acclaim on its release. Nucleus is their long awaited follow-up and takes the Anekdoten sound on a slightly different direction. Despite the new approach and the obvious general improvements, I'm not as satisfied with the instrumentalists' tones. Guitarist Niklas Berg's diminished chord patterns are becoming a mite too familiar. I keep hoping he'll break out into a long guitar solo or something. Jan Erik Liljestrom's bass tone has gotten heavier and his incessant pounding throughout the albums seems a bit like how Jannik Top would sound if you ran over his dog. It so unbelievably angry sounding, and to boot you can barely recognize his often effected vocals anymore. While these critical observations of the band's tones aren't meant to scare anyone off, I do mention them as I feel the album would have benefited highly from some diversity. The music is still up to Anekdoten's standards and quite good. Theres still some great mellotron here and a stronger Fender Rhodes presence. The murky and heavily stormy production give this a very swampy feel similar to some of the mid 70s Italian groups (Ibis' Sun Supreme comes to mind) and one I quite like. This definitely seems to be a general improvement on Vemod and an album with a different direction.

Anekdoten's eagerly anticipated sophomore effort proves to be a masterful development and refinement of their heavy and driving progressive sound. While Nucleus certainly adheres to the essence of the band's musical character as defined on Vemod, Anekdoten have, much to their credit, distanced themselves somewhat from the more overt King Crimson stylings found on their first album. The writing has matured as well, with excellent use of dynamics and contrast, and a plethora of solid musical ideas carrying each of the songs along. The heavy riffs and melodies that serve as the foundation for many of the tunes find an even more effective home among the various keyboard and guitar countermelodies which give Nucleus an element of musical intricacy much less prominent on Vemod. The stark and poignant melodic sensibility displayed by some of the quieter sections may remind one of Landberk at times; the musical understatement working because of the busy and aggressive sections framing it. Though still drawing at times on the 70s Crimson sound, Anekdoten have injected a larger dose of originality and creativity into the recipe on Nucleus; but one of many exciting and promising signs for their future. All in all this is an extremely powerful and well conceived album. Nucleus should live up to any and all expectations fans had placed on it.

Thee Majesty - A Hollow Cost & Thee Fractured Garden – The incarnations of Genesis P-Orridge continue to manifest in many different and sometimes compelling ways. Two of the composer’s spoken word series are reissued here by Voiceprint in part to...  (2005) » Read more

Rotor - 3 – Rotor is a power trio (drums, bass, and electric guitar) from Berlin who play aggressive hard-hitting instrumental music that is a mixture of Starless era King Crimson and stoner rock. This...  (2008) » Read more

Legendary Pink Dots - A Dream Is a Dream Is a Dream – This LPD DVD release is the earliest known live concert footage of the band, recorded live at De Vrije Vloer in Utrecht, Holland on January 21, 1987. At that time the LPDs were a six-piece band...  (2006) » Read more

I Giganti - Terra in Bocca (Poesia di un Delitto) – Like the early New Trolls, I Flashmen, and countless other Italian groups between 1967 and 1971, I Giganti were a psych/beat group attempting to break new musical boundaries. The influence of both the...  (1995) » Read more

Amoeba - Pivot – Without reading the credits, it would be easy to assume Amoeba is a four or five member band, but in reality it’s two guys: Robert Rich (vocals, keyboards, steel guitar, flutes) and Rick Davies...  (2001) » Read more