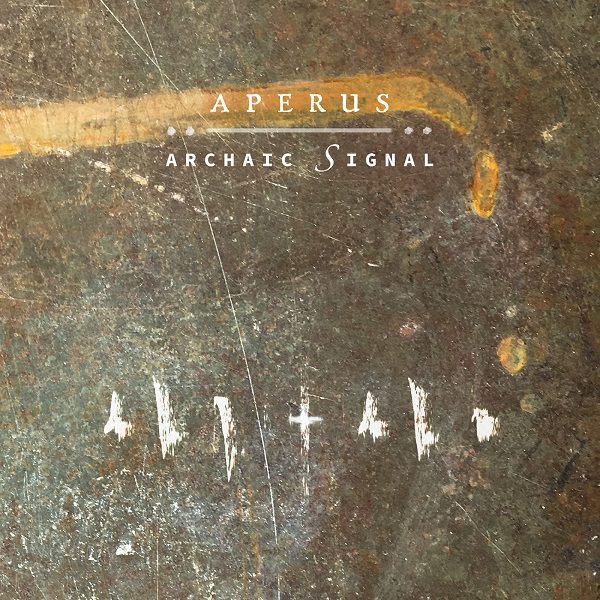 Brian McWilliams is a sound sculptor and photographer based in the high desert of northern New Mexico who releases his material under the moniker Aperus. A couple years ago we reviewed the previous Aperus release Lie Symmetry, an explorative album of ambient textural creations, part organic, part industrial, all created from numerous sources including synths, loops, samples, and more. With his latest, Archaic Signal, he takes his vision a couple steps further into the mysterious worlds of light and shadow, dark dreamy textures and sonic erosion, a space where sound serves its own ends, seeking neither melody or rhythm, where dark ambient structures move slowly, inching their way through the gray fog of disorientation and natural chaos. The album contains nine tracks totaling a few minutes over one hour; the earlier cuts feature samples of a short-wave radio as part of the source material, the latter tracks feature loops of birds communicating, all of which are compelling sources when mixed with the industrial grade groaning textural sounds from an array of synthesizers, samplers, loops, processed guitars, and other sound sources. Being that McWillams is also an artist who uses the medium of photography, be they varied landscapes or minimalist microcosms, the individual tracks go far to pair that imagery with a world of sound that matches the overall mood. The opening salvo, “New Antenna,” wastes no time introducing samples of shortwave radio, bursts of sound in a variety of languages from all over the world, mixed seamlessly within a whirring droning background that eventually gives way to mysterious random percussive sounds that slowly fade into a distant echo. The title track offers a dense textural soundworld that combines imagination and mystery, eventually integrating sampled sounds of radio static as the piece proceeds along its path forward. “Phase Shift” is a dense chordal loop that repeats for a little over two minutes, giving way to “Newspaper Rock” that slowly reintroduces more shortwave radio fragments amid a swirling bed of dark, almost sinister textures. A looped rhythmic element is introduced on “Canopy of Stars,” fading in and out several times over the piece’s duration, while the gravelly gray textures underlie mutes swashes of tonal color. Bird sounds are first introduced at the beginning of the 17-minute “Birdsong as Mantra,” eventually joined by cyclical synth sounds and dark brooding textures, probably the most interesting piece on the album, the sound of the birds slowly evolving as elements are disassembled, effects are applied, and reassembled more or less randomly. A dreamy transience continues through the brief “Silver Birds,” “Archaeodreaming,” and the closer “Afterglow”, also using bird sources but in some cases processed well beyond recognition. Archaic Signal is a compelling release, beginning to end, the CD edition housed in a beautiful 5x7 shaped card package with many extras inside.