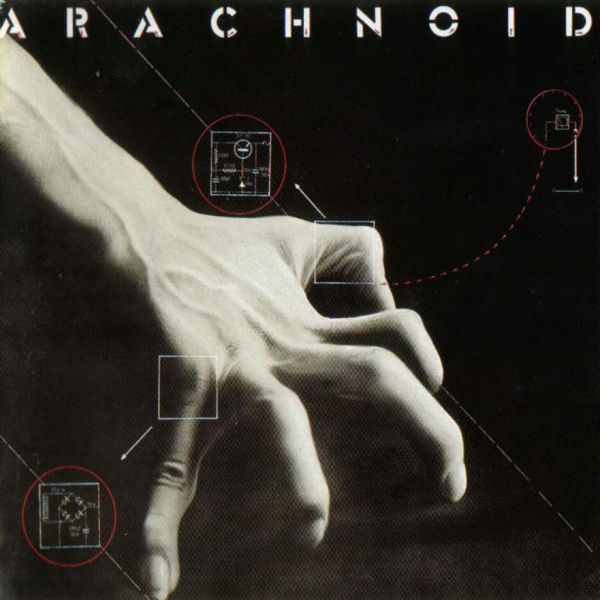 In 1979, progressive rock was all but dead in many countries, whether the support had gone or the big bands had become subsumed by arena rock. But there was really a lot going on in France in the late 70s and early 80s, where artists effortlessly switched away from the major labels to a wide variety of independent and private releases. There was a certain subsection of these bands working from the mid-70s period King Crimson model with perhaps a dash of Mahavishnu Orchestra, mostly focused on the way the guitar was being played with a concentration on dissonant and modal scales rather than the major / minor / romantic / symphonic style that would make a huge comeback in the country by the time the 90s rolled around. Arachnoïd was based around a lot of these guitar patterns and it gave them a much darker and edgier sound. Backed up by spitfire drumming, the weird string synth sounds (usually Crumar or if lucky an ARP Solina) that showed up on a lot of releases from the era, as well as some of the cheaper monophonic synths of the day (oh and some mellotron too), Arachnoïd managed to create a classic debut that far surpassed its limitations. Also, like a lot of bands in the late 70s, Ange was a dominant influence particularly on the vocals, and here they are delivered with great intensity and passion and like Ange occasionally did, some spoken words and embellishments as well. Like all the good progressives, Arachnoïd created a balance of dynamics where they could bring the sound down to a quiet and build it up to a rage and then change key or tempo on a dime. What was really amazing is that with such a lo-fi, often tinny sounding production, they could often make you forget about it just by the sheer breadth and complexity of their compositions. I remember this one hitting me after several listens with force one night and it has remained a favorite ever since.

From the annals of French obscurity, Arachnoïd was a six-piece that recorded only this one album in the late 70s, and then disbanded a few months after its release. Using guitars, bass, drums, acoustic and electric pianos, Farfisa organ, Mellotron, synthesizers, and a dedicated lead vocalist — with most players doubling on vocals, as well as guest saxes and flute — their music was a somewhat dark and mysterious instrumentally oriented progressive rock, with a variety of not-so-obvious influences, most of which are well absorbed. Their compositions and overall style were very original, perhaps a slight nod to King Crimson in some of the instrumental sections, and Genesis in others, but overall their sound is at least as unique as most of the better French symphonic bands of the same period not operating in the shadow of Ange — namely Shylock and Pulsar. One might hear conceptual similarities with the band Halloween, who of course didn't arrive on the scene for another seven years, but are probably far better known among prog fans. This is a very welcome reissue, and one this writer has been patiently waiting for since Musea teased us with a vinyl reissue in the late 80s. For the CD reissue, four bonus tracks have been added, including three live tunes recorded at least a year before the album, and while the sound quality on these tends to be a bit shabby, they give a good insight to the nature of the band in a live setting. Add this to your list of things to get.

Sonus Umbra - Spiritual Vertigo – I really want to like Sonus Umbra. They have so many elements I like – a combination of electric and acoustic instruments, judicious use of modern technologies, complex song structures with varying...  (2005) » Read more

Atila - Intención – Best known for the incredibly magnificent Reviure, one of the best progressive rock albums all around, Atila are a Spanish classical rock group that started small and went out with a bang....  (1994) » Read more

Barrock - L'Alchimista – Barrock are a new Italian sextet who decided to release and distribute their debut L'Alchimista in Japan. The music is influenced by many Italian 70s bands like Banco del Mutuo Soccorso, Premiata...  (1994) » Read more

The Trey Gunn Band - The Joy of Molybdenum – For those fortunate enough to see the Trey Gunn Band live in January 1998, most of these tracks by this power trio will be familiar. Initial sessions for the album were just prior to the same time...  (2000) » Read more

Peter Baumann Remembers How to Be Cosmic