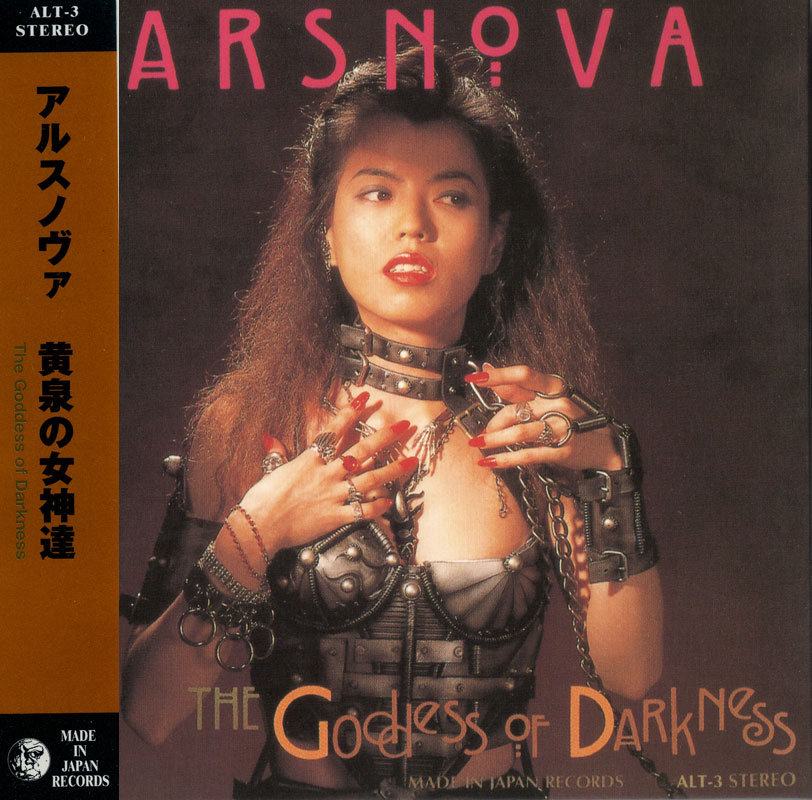 The Goddess of Darkness is the third and latest release from this Japanese instrumental trio and is a solid follow-up to their last album, Transi. Although influenced by the likes of ELP and King Crimson, over the course of their three album career, Ars Nova has developed a trademark sound that is unmistakably their own. Primarily due to the lavish keyboard textures of Keiko Kumagai, Ars Nova's tunes are fast-paced romps through the entire sonic spectrum. A great orchestrator, she keeps you guessing by changing keyboard sounds about once every 20 seconds or so. While still relying heavily on her mainstay sounds — Hammond organ, piano, sampled strings, monophonic lead synth — Kumagai stretches out here and adds a lot of new tones too keep the variety factor high. For example, "Fury" makes use of Mellotron strings and a dirty overdriven lead tone that sounds like a keyboard being played through a guitar amp — not to mention harpsichord, Schroeder-esque toy piano, orchestra hits, screams... etc. The music is still very minor. This gives the band a very dark and unsettling sound, but that's what they have in mind judging from their album and track titles. There's even a track on the album, "Ainsel," that's a minor key variation of "Mary Had a Little Lamb"! With the exception of a few spots on the album, like the cool fuzz bass break on "Morgan," the bass and drums are noticeably secondary to the keyboards. More focus on the drums and bass from time to time would add a lot of depth to the overall sound, and give Kumagai well-deserved breaks too! ELP, U.K., Yes, and King Crimson fans should find a lot to like in the music of Ars Nova, and The Goddess of Darkness is their most solid work to date.

In mostly minor modes, Ars Nova, Japan's all-female progressive band, delivers riff after riff of enjoyable, classic prog keyboard trio fare targeted at the not-so-faint-of-heart amateurs. Driving complex arrangements mostly giving credits to the busy keyboard work of Keiko Kumagai, the music always manages to keep a dark tone hovering, which helps in creating a thick gothic atmosphere. Machiavelous Hammond grinding, analog synth galore, deep cymbal-punctuated expressions, sudden counter-rhythms changes, all carry the listener into The Goddess of Darkness realm, one which could mainly belong to a Clive Barker feast of daemons, if it wasn't for the explorations found here and there, giving the overall a substantial foothold, making the album stand on its own. How three beautiful damsels can play such a ferocious music gives an aura of mystery but for the prog keyboard trio fans it's clear: Ars Nova's third album is an extravaganza of Gamerian proportions. Recommended.

I never thought "progressive rock" was a music of image, but Ars Nova have done a lot to change my mind about that. Anyway, what is it with the Japanese symphonic rock groups? Have you checked out the "Discography of Japs Progressive" by Marquee? You'd think some of the groups like Gerard or Teru's Symphonia were posing for Kerrang or Circus magazine. And the same goes for Ars Nova here. From a California perspective, this type of crass commercialism is exactly why your average progressive band gets forgotten by the media at large. I'm starting to find some of Ars Nova's approach a bit high in the gimmick department — throw three ugly guys on the cover and I imagine Made In Japan could quickly go bankrupt. But strip the CD of most of the posing (thanks Musea) and you've still got that bombastic symphonic rock style that most of us certainly appreciate. And Ars Nova certainly do it better than most. However, throw Transi and Goddess in a random playback CD player and try to guess which album each song comes from. Without a bit of research I suppose this would be difficult. The prognosis? A touch of Ozricitis, maybe?

It was about the time of ProgFest '94 when Arsnova's second album Transi made a big splash. Not just because this keyboard-heavy power trio was comprised of Japanese females, but because it kicked tail so hard it made your head spin. The good news is two years later little has changed. The bad news: little has changed. What we have here is every bit as superb as Transi and basically every bit the same. Oh, sure, there are some minor differences: the sound is a little better, the fuzz-bass follows the recent trend in progressive, the keyboards are very "current," and so on. But Keiko Kumagai's writing is as consistent as her previous work on Transi: explosive Emersonian gritty organ riffs, smooth portamento leads, music that mutates constantly, powerful dynamics and a heavy classical influence. All three ladies turn in outstanding performances as well. Goddess is an album that will knock you out at first, but over the long haul will become a bit of a novelty item. If you've never heard this band before, you simply must check out this one, or the previous one. Recommended.

Dragonwyck - Dragonwyck – In case you're wondering, Dragonwyck is the title of a 1944 historical romance by Anya Seton, made into a movie starring Gene Tierney and Vincent Price. This Dragonwyck, on the other hand, was a psych...  (2007) » Read more

Amygdala - Amygdala – The brutal apocalyptic menace of the opener “Utrecht” could be described as a four-way collision between Univers Zero (that “chamber” sound), Magma (the rumbling, growling basses), Present...  (2004) » Read more

Chris Karrer - Dervish Kiss – Karrer was the longtime main-mover in the classic lineup of Amon Düül II, playing guitar, violin and sax. Since the band's demise, he has remained active in music, working with Popol Vuh, Peter...  (1994) » Read more

Felonious Bosch - Toy Box – An interesting new release by this Minneapolis / St. Paul based sextet, one that skirts a lot of musical genres (elements of pop, folk, rock, blues, jazz and experimental are all fused into their...  (2011) » Read more