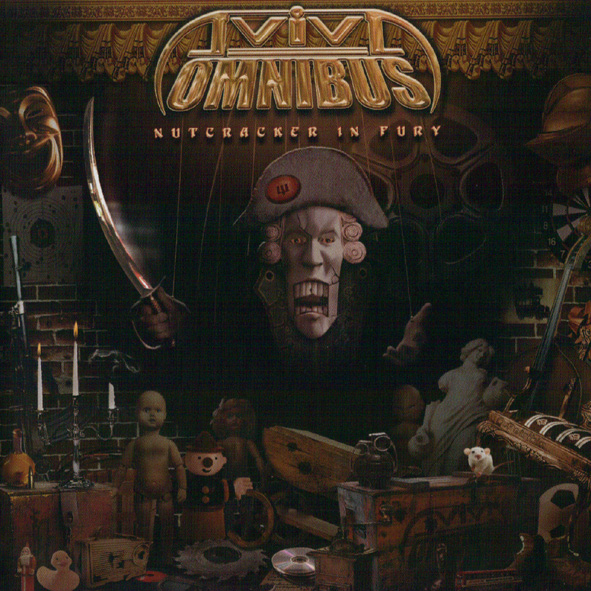 Picture, if you will, channeling the essence of Metallica, Keith Emerson, and Ralph Lundsten to play Tchaikovsky’s Nutcracker with demonic abandon and you might have some glimmer of AvivA Omnibus’ Nutcracker in Fury. This crazed and twisted approach to the classic Christmas ballet is the brainchild of Russian keyboardist Dmitiri A. Loukanienko. Nutcracker in Fury is Dmitiri’s second release and he has augmented his keyboards this time around with two guitarists, a bassist, a drummer, a violinist, and a second keyboardist to form AvivA Omnibus. The disc opens with a short 50 second snippet of the closing track “Apotheosis” played in reverse, “Sisoehtopa,” a harbinger of the madness to come. “Sisoehtopa” segues directly into “Overture in Fury” that is a distorted, dissonant, energetic, and twisted heavy metal prog treatment that is barely recognizable from the original, though a few familiar musical phrases occasionally pop up. “Heavy March” features fiery guitar and fiendish violin. Then we come to “Children of the Damned,” which begins with a techno vibe, morphs into more of a hip-hop mode, and ends as death metal. “The Frozen Doll’s Town” brings some respite to the madness that returns with “Dance of the Giants” and its incorporation of the “Dance of the Sugar Plum Fairies.” You have to be in right mood for this densely packed musical delirium and it may not be for everyone. However, if you love testosterone-driven musical madness, then this disc might be for you.

When Nothing Is Something