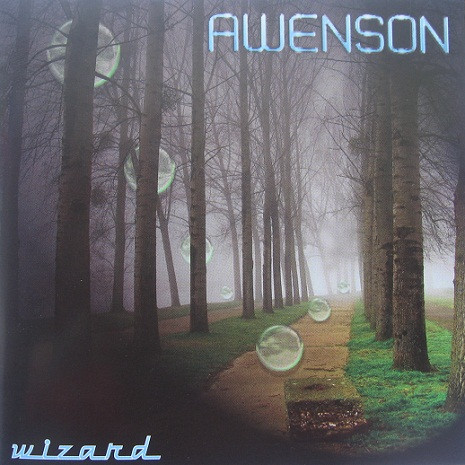 Wizard is the second album by Awenson (aside from self-produced CDR releases), whose first was released under the name Awen, and whose real name is Joël Bernard. These two long tracks, “Hypnotic Ways” and “Psychedelic Dream,” are loving tributes to the 70s work of Klaus Schulze, Jean-Michel Jarre and, most strikingly, Tangerine Dream. And if you let those fat textures, melodic excursions and chattering sequencers open memory’s floodgates, you’ll also hear the pop song modulations of TONTO’s Expanding Headband, comical relay tag of Tomita, amplitude swoop of Kraftwerk, brooding gravitas of Pink Floyd, spooky reeds of Ataraxia... the list goes on. Of these two selections, the 30-minute “Hypnotic Ways” is the more impressive as a showcase of technique. It could really be six linked tracks with pauses for breath between them. A tentative beginning becomes a skyscape washed with cloud filaments; the world brightens in a procession of dancing sequencer programs; a pensive soundtrack pops open into a baby Slinky nest; a massive computer’s fat heart pumps data through miles of circuitry; cold crystals melt into bubbly percussion; a funeral march recedes toward a flattening horizon. “Psychedelic Dream” might also be better expressed in six segments, although with a running time of 41:12, the developments are far more gradual. This track is really about atmosphere and the slow unfolding of moods, unlike the first track’s lesson in how to celebrate your synthesizer heroes. As a whole, Wizard would be an excellent audio cocoon for some serious late night thinking.