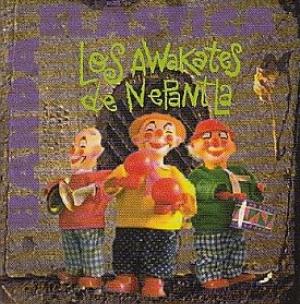 Dedicated to the memory of Frank Zappa, this Mexican RIO ensemble's superb new album is almost as reminiscent of another underappreciated influential innovator in rock music as it is of Zappa. So when did these guys meet George Clinton?!? Seriously, on several of these tracks, Banda Elástica has definitely "got the funk." Some of this could almost be from a mid-70s Parliament session on which Zappa wrote the horn charts (and threw in some of his trademark mallet percussion as well). Led by sax, keyboards, and the occasional guitar lead, Banda Elástica's intricate music twists through various melodic themes and sudden changes in rhythm and feel. Throughout it all the band displays their solid chops and remains impressively tight and well balanced. The folky touch, musical playfulness and sense of humor are at times reminiscent of Samla Mammas Manna, but for the most part Banda Elástica has their own distinctive sound. Stylistically, Los Awakates blends the aforementioned funk with a more characteristic, energetic RIO sound, and on the later tracks the group gives a definite nod to Zappa's more avant-garde arrangements for rock band. It is perhaps in these Zappa influenced pieces that Banda Elastica is most impressive, both in the technical mastery of their instruments, and their ability to distill the essence of Zappa's style and incorporate it into their own. Los Awakates de Nepantla is a must for fans of both RIO and Zappa's more complex musical leanings, and come the end of the year this album should easily find itself near the top of the best-of-'95 list.

I haven't much music coming from across the border recently. However, we are very lucky that Banda Elástica managed to record their third album before the peso crashed. Los Awakates features some of the best RIO and world-fusion that I've heard in quite some time. Combining modern rock and jazz influences along with what sounds like traditional Mexican and/or South American music, Banda Elástica once again have defied categorization. Complex and challenging, yet upbeat and listenable, fans of bands like Congreso, Samla, as well as ethnic fusion are likely to enjoy this album. The instrumentation varies among tracks: guitar, bass, drums (and various other percussion items), flute, sax, clarinet and synthesizer are used. The feel moves from jazz, to big-band, to waltz, to world music. In the RIO tradition, the band uses the traditional musics of their heritage, and updates them with modern instrumentation and style. The result is a busy, complex amalgam of styles with an overlying ancient, spacious feel. This release is easily one of my favorites of all the new releases of the last few years. I highly recommend this album to anyone who enjoyed Banda Elástica's previous material, as well as those who listen to complex fusion and RIO.

Taal - Skymind – I know it may seem like a glamorous life to be a music critic, getting all those free CDs, getting into shows for free, hobnobbing with the stars. But I assure you, it’s not all it’s cracked up to...  (2003) » Read more

Bevel - Phoenician Terrane – I’m generally a big fan of music born of lofty ambition, even if it doesn’t entirely succeed, but there’s something to be said for a modest recording that accomplishes its goals completely. Via...  (2008) » Read more

Original Outer Limits - Outer Mania – Outer Limits were one of the mainstays of the Japanese 80s symphonic scene and perhaps one of the most accomplished of their peers (Teru's Symphonia, Pageant, Mr. Sirius and others). They released...  (1994) » Read more

Jenny Scheinman - Twelve Songs – Violinist and composer Jenny Scheinman’s latest CD is a trip down memory lane to the deep bayous of the South, emphasizing lazy 30s jazz. She has enlisted a small ensemble to forge her vision of...  (2006) » Read more

Magma - "Les Voix" - Concert 1992 Douarnenez – Not so much a true Magma album as it is a choral interpretation of some old Magma music. With no less than nine vocalists (led by Christian and Stella Vander), the choir (about half male, half female)...  (1995) » Read more