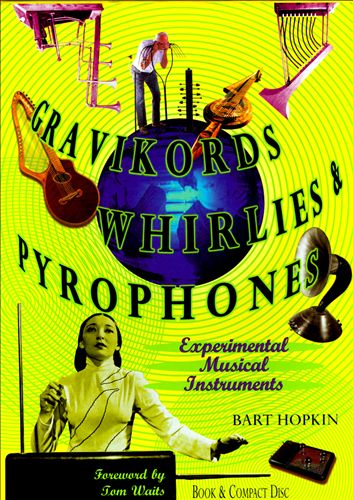 If you've ever had an interest in experimental and in some cases unique musical instruments, then this beautifully illustrated (with many full color photos) volume by Bart Hopkin, with a forward by Tom Waits, should be a good enough introduction. In fact, Hopkin is the editor of the quarterly publication Experimental Musical Instruments, which may be your next step if this volume piques your interest. Waits' forward recounts his own experiences with found sounds and sonic experimentation, as well as a description of his "dumpster harp," his Chamberlin, and his collection of megaphones and bullhorns. This is followed by a two page introduction by Hopkin himself, a bit more of a technical and historical introduction.

The bulk of the 96 pages contains numerous articles, each devoted to a particular instrument-maker and his instruments. This section begins with Michel Moglia and his "Orgue a Feu" (fire-organ, or pyrophone), which creates its sound via controlled explosions within large metal tubes of varying length. Harry Partch's 43 note just-intonation scale and several of the many instruments he had to create in order to realize it are featured here with plenty of background information — it's not the definitive article (for that you'll need to snag some early issues of Surface Noise) but it's definitely a good introduction, and plenty of bibliographic references are included for those who want to explore further. An essay on Leon Theremin and his eponymous instrument, of Richard Waters and his "Waterphone," of Barry Hall and his numerous handmade ceramic instruments, and Robert Grawi and his "Gravikord" (sort of a hybrid between an African "kora" harp and a kalimba) are all featured prominently, as well as numerous others. Also included are some instruments built around everyday odds and ends like the various guitars and such in Ken Butler's "Object Opera" (one illustration shows his "bicycle wheel guitar"), and Wendy Chambers' "Car Horn Organ."

Indeed, this is a book that's interesting from beginning to end, not too burdened with technical details, but instead focusing on the lives and the history surrounding each of the included instruments. The accompanying CD has eighteen tracks featuring many of the instruments mentioned in the book, in many cases with performances by the creators. Certainly Wendy Chambers' "New York, New York" played on a bank of car horns is a standout, but so are many of the other pieces. Sadly, Moglia's "Orgue a Feu" is not included, but most are. In all, this is a book and CD that serves a good introduction to the relatively unknown world of innovative musical inventions. Highly recommended for all.