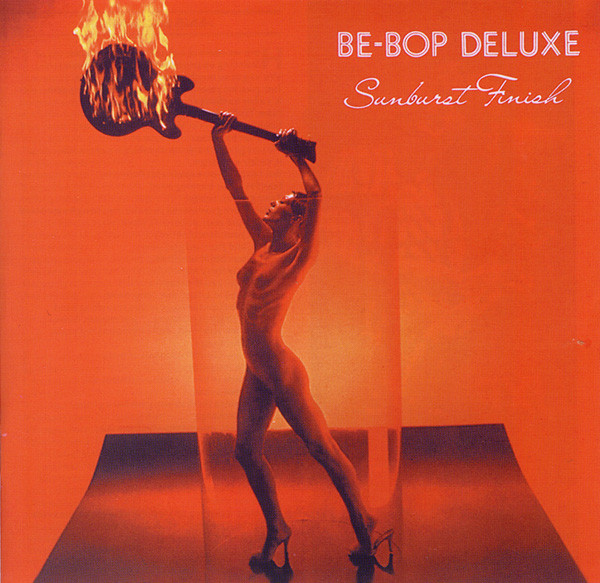 To my mind, Be Bop Deluxe has always occupied a unique position in the ranks of 70s progressive rock bands. Unlike most of their contemporaries, they didn’t arrive at their progressive sound by adding elements of Classical music, jazz, or anything else. They were pure rock and roll done in a sophisticated and intelligent manner. Listen to “Fair Exchange,” the opening track from 1976’s Sunburst Finish, and you’ll hear the tune’s unmistakable roots in Chuck Berry. That’s something you’d never get in Yes or Genesis, and it also positioned the band to avoid the collapse of progressive rock as a commercial force at the end of the 70s. Given that they lacked what became perceived as “pretense,” they could move on to Drastic Plastic, which stylistically resembles New Wave, with relatively little change to what they were doing — compare “Blazing Apostles” here. Several of the songs on Sunburst Finish have an aggressive punkish attitude, and while Bill Nelson is obviously a talented guitarist, his solos are kept to unindulgent lengths. In fact, no track on the album tops six minutes. The arrangements throughout are sparkling and clear, with beautiful harmony vocals and tasty keyboards featuring all the classic sounds: piano, mono-synth, electric piano, string synth (but no Mellotron).

In addition to the original album mix, this new release features a new stereo mix and a handful of bonus tracks. The deluxe edition features a CD of various BBC sessions and a DVD with surround-sound mixes and a few video items. The new stereo mix sounds great, bringing out all the subtlety without sacrificing power. The bonus tracks are a mixed bag, including single versions, demos, and alternate vocal takes. None of them is essential or adds much to the album’s legacy, but might be of interest to completists. It’s great to see Be Bop Deluxe getting this kind of lavish treatment — their place in the history of 70s rock deserves greater recognition. The BBC Sessions disc presents a real problem, however. The performance is energetic and spirited, but there are some technical issues that make it near unlistenable for me. Andy Clark’s synthesizer leads are hopelessly out of tune. The songs that don’t feature that keyboard are great, like “Sister Seagull” and “Third Floor Heaven,” but “Life in the Air Age” and “Ships in the Night” are seriously marred. The three tracks from sessions for John Peel do not suffer from this problem, and are really solid, with a nice extended version of “Blazing Apostles.”