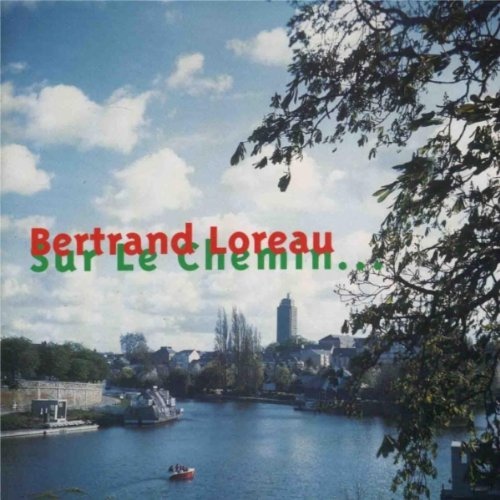 Bertrand Loreau’s third album Sur le Chemin... is the first to appear on Musea’s new sub-label Amplitude, an outlet for what Musea calls electronic modern music. Loreau creates pretty dreamlike melodies powered by percussive sequences that are fairly derivative of recent Tangerine Dream efforts. Like Maestracci’s Symphonia, nothing of interest happens on this disc. Sur le Chemin ... is your standard New Age fare. If you like subdued background melodies this may be the album for you. Since I prefer my music on the edge, Sur le Chemin... did not pass muster for me.

France hasn't exactly been renowned as a breeding ground for solo electronic artists. I can call to mind only a small handful who have surfaced over the years. So this album by the one-man orchestra Bertrand Loreau, came as quite a surprise. Sur le Chemin started off rather promising I thought, with a few pieces skirting near Tangerine Dream's mid-80s albums like Underwater Sunlight. The second track, "Jeu d'Enfant" sent my mind back to Vangelis, with its simple ostinato patterns and pretty melodies couched in a crystalline web of digital sound. This orthodox but refreshing tone continued on for the first third of Sur le Chemin. Software or Lightwave might be reference points — the second generation electronic contingent, derived from Tangerine Dream. Loreau differs markedly though, since he substantially structures his work, with a hefty accent on form. (Not always valued in this genre, admittedly, but it's there).

All was well and good until after the first third, when the music began to circumnavigate its way dangerously nigh of New Age dominions. As the music shed its depth and richness it became more and more song-structured, revealing a piano-based method of composition, but transferred to synthesizers. Nothing particularly wrong with that, but the synthesizer's sound-manipulating virtue is then forfeited in favor of an emulating function. (This seems to be the post-70s predicament of the synthesizer). At this point various other instrumental colors were introduced such as clarinet, classical guitar, and harp. Sure enough, after a bout of this we start to take a swing for the better, resulting in a slew of short pieces comparable to Nik Tyndall's light New Age space music. This material weaves an ethereal spell that was patently absent hitherto. So the album ends on an up note, having trundled through some rather rough terrain.

This is a genre that has become glutted with practitioners, in approximately equal proportion to (and because of) the decrease in expense required to practice it, alongside the convenience of working alone. The down side is that to turn peoples' heads you have to really hit with a wallop. Sur le Chemin won't fry your brains into lysergic bliss or blast you into the cosmos, but could serve as a decent introduction for newcomers to what's happening in the world of New Age synthesizer music. More finicky devotees of the genre, however, are likely to give it a miss.

Magma - "Les Voix" - Concert 1992 Douarnenez – Magma's Christian Vander has decided to follow in the footsteps of Frank Zappa, Andy Latimer, and others in an effort to fight the bootleggers, and has started his own record label AKT to release...  (1993) » Read more

Nirgal Vallis - Y Murio la Tarde – This Mexican quintet dates to the early 80s, to Mexico City's blossoming underground progressive scene. In 1985, they recorded one side of an album, In Principio / Y Murio la Tarde, shared with a...  (1996) » Read more

Escapade - Obscured Dialogues – Those who have checked out Escapade’s previous two releases, Searching for the Elusive Rainbow and Inner Transluscence, may have some idea of what to expect from this limited edition set of live...  (1998) » Read more