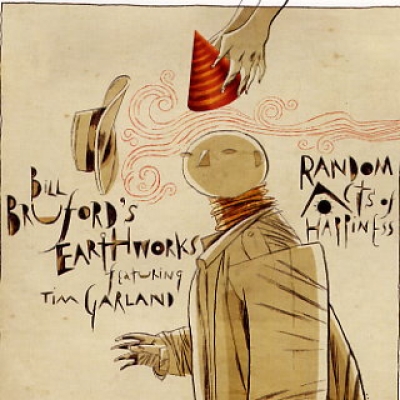 It has been said that jazz is all about Swing. I’ll go along with that — as long as I get to define Swing my own way. Swing is more than just a particular rhythmic feel; Swing, to me, is an attitude toward the music, an attitude that says everything is open to interpretation, even the beat. Swing is about improvisation, and while rock and other genres may feature improvisation, the beat is not subject to interpretation. In rock (for the most part), the beat is master to the music, and if you forget that, you’re not rocking! Paradoxically, this fact leads to jazz having a Groove. Other genres can Groove, but they arrive at it from a different direction. Anyway, all this gets around to my amazement at Bill Bruford’s drumming. Long ago he earned his place as one of the great rock drummers of all time, and his precision is legendary. We learned some time ago that his heart was more inclined toward jazz, and through the various Earthworks incarnations, he has proved that he also ranks as one of the great jazz drummers. He’s also the kind of leader who surrounds himself with supremely talented cohorts and gives them room to shine. Another amazing thing about Bruford (as if there wasn’t already enough) is his skill as a composer. From the (perhaps) overly complicated tunes of his early solo days, he has grown to master the balance between complexity and Groove, producing truly outstanding music that satisfies from all angles.

Carpe Diem - En Regardant Passer le Temps – This may be one of the longest anticipated CD reissues of all time for progressive rock, the great Carpe Diem's debut album. Hailing from Nice (home of Shylock, Step Ahead, and Visitors), this quintet...  (1994) » Read more

The Black Angels - An Occurrence at 4507 South Third Street