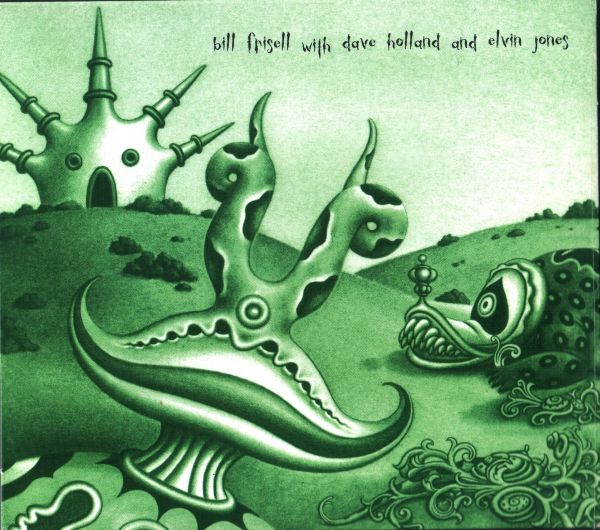 Leave it to guitarist Bill Frisell to alternate jazz takes on American roots music with a turn together among two of the 70s' most venerated jazz sidemen who played with Miles Davis. Holland made in-roads within Miles’ Bitches Brew before cultivating his own group while Jones began much earlier with Miles but was recognized for backing Coltrane on A Love Supreme. Prominent tracks include "Twenty Years,” a resonating piece where Frisell’s acoustic guitar parallels his leads to great effect. “Blues Dream” is given a different rendition by this trio than that on Frisell’s album of the same name, where the guitarist's double tracked guitars intertwine and divide before Holland takes an empathic solo. The album is co-produced by ambient entrepreneur, Michael Shrieve, who no doubt had important influence on the mix. Andy Williams’ signature piece “Moon River” gets the emotive folk-ish treatment against Jones’ shuffle snare drum. The album’s longest piece, “Tell Your Ma, Tell Your Pa” is an ECM-ish ballad where Frisell’s plaintive lead graces a swing tempo that sways gracefully with the farmland wind. “Again” opens with a characteristic drum cadenza from Jones before distilling into another moody and mysterious atmosphere. The disc literally cries out for live performance, but I doubt any of the musicians’ individual calendar would allow. This is the kind of album that wins Grammy Awards and thus highly recommended to fans of modern blues and jazz counterpoint.

The Brimstone Solar Radiation Band - Smorgasbord – Apparently this is the third recording by this excellent Norwegian quintet, although they are new to me. Where have I been? Like their countrymen Motorpsycho and The Last James / Haakon Ellingsen,...  (2010) » Read more