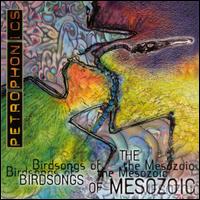 Ever since I first heard this band back in the early 80s, I’ve been fascinated by their style: rock instrumentation playing challenging music which is not based in the conventions of rock and roll, sort of like what Stravinsky would do with a drum kit, electric guitar, and electronic organ. In fact they covered part of Stravinsky’s “Rite of Spring” on an early album. Over the decades, the band has expanded their scope to touch on rock styles (like the spy-theme guitar on this disc’s title track) and experienced some personnel changes, but the basic esthetic has not changed. Pianist Erik Lindgren is still the dominant player (and majority composer), but Birdsongs would not be Birdsongs without the other players. Ken Field’s saxophones provide both melody and edge; Michael Bierylo’s guitar is by turns melodic and sound effect; Rick Scott’s contributions on synthesizer and “sound design” are a little hard to but a finger on, but essential none the less, comprising (I suppose) all the non-piano keyboard parts. In spite of the lack of a permanent drummer, rhythm parts are an integral part of the band’s sound, from the driving drum machine of “Petrophonics” to the atmospheric noises of “Study of Unintended Consequences” to the massed pounding toms of “The Insidious Revenge of Ultima Thule, Part One.” The main thing that sets this release apart from the other Birdsongs albums is an attention to ambiance. Even in the faster tunes, there is a fullness to the sound and incredible richness of detail I don’t hear in previous efforts, fine as they were. Listen to Petrophincs closely and a multitude of great little touches will become apparent. This is a sure bet for the top of my year’s best list, and I could easily go on much longer about its wonders.

Various Artists - Progfest '94: Variety Arts Center - Los Angeles – When it finally appeared at Progfest '95, the ink was still drying on the booklet of this two-CD retrospective of the show a year before. Each of the nine featured bands (Halloween, Kalaban,...  (1996) » Read more

What Is Hanterhir's Favorite Key?