Birdsongs of the Mesozoic — The Iridium Controversy
(Cuneiform Rune 179, 2003, CD) 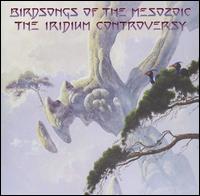 This new offering from my favorite prehistoric animal noise group certainly lives up to the high standards of their previous releases, and over the long term may turn out to be one of my favorites. As on previous outings, Erik Lindgren is responsible for composing about half the album, though all members’ contributions are of high quality and remarkably consistent stylistically, with angular ostinati (usually on piano) that remind me of Bartok, unpredictable melodies (usually on sax), highly rhythmic passages (percussion and who knows what else), and interjections of noise (usually on guitar) to keep it from getting too pretty. On many of their previous albums, they’ve included a humorous cover tune (“Peter Gunn”, “Rocky and Bullwinkle”), and while those are fun, ultimately they detract from the mood created by the excellent original compositions from all of the band members. One aspect of their past that they’ve chosen not to leave behind is founding member Roger Miller, who appears on piano for new recordings of two Birdsongs from the group’s early days, including his own composition “The Beat of the Mesozoic, Part 1.” It says something about the band’s consistency of vision even through personnel changes that the old pieces remain close to their original versions and still sound perfectly at home with the new tracks. This seems appropriate to me, as the band’s very name says the music is most important, not the players – these are the sounds of a distant era brought to life in our own.