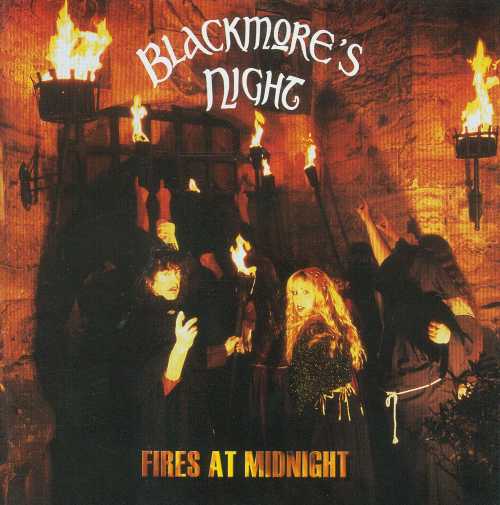 Guitar legend Richie Blackmore (yes, the guy from Deep Purple and Rainbow) has gone medieval. Under the name Blackmore’s Night, he and his fiancée Candice Night have released several albums of folk-rock that draw heavily upon medieval and Renaissance traditions. Fires at Midnight is their third, and in my opinion, their best release so far. Night’s piping soprano and Blackmore’s acoustic guitar are the primary voices on the disk, although there’s plenty of folk instrumentation to back them up: hurdy-gurdy, recorder, mandolin, fiddle, etc. Orchestral instruments are also used, including a delicate oboe part on “Midwinter’s Night” and baroque trumpet fanfares on “Waiting Just for You” and “Crowning of the King.” Still, there are enough keys, drums, bass, and electric guitar that no one could mistake this for pure folk; at times, the disk really rocks. The title track, for instance, begins slowly and mystically, but gradually turns into a mighty medieval-rock anthem with thundering drums, wailing bagpipes, and smoldering electric guitar solos. For comparison, think of 70s Tull with female vocals, but with a bit more major-key cheer and a few touches of ethereal musical mysticism. Some of the melodies on this are so catchy that they almost sound like commercial jingles and the drum work on most tunes is extremely simplistic— but as a whole the disk works extremely well. Readers who enjoy medievalesque prog-folk, expressive acoustic guitar, and sweet-sounding female vocals will love this.