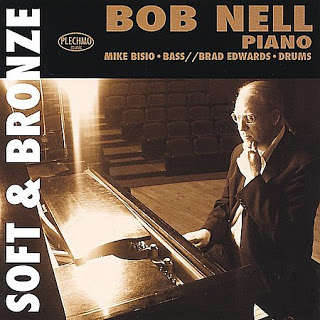 Bob Nell has been playing jazz piano for nearly 30 years (mostly with drummer Brad Edwards) supporting jazz icons such as Ray Brown and David ‘Fathead’ Newman. His latest set of eight pieces features a trio that concentrates on the fine attributes of the small acoustic club combo. The opening track, “808 Express,” is a blast from the past as Nell delivers chops not unlike those jazz heroes he has emulated. Next up is a the bouncing melodic title piece that serves as a plateau for Nell’s nimble ability at the keys and later on giving space to upright bassist, Mike Bisio. Things heat up a bit for “Triumphant Thoroughfare,” which has an alternate theme development from prior songs. “Song for Aria” mines a familiar mode for jazz pianists: nightclub mood soloing with minimal backing and mournful melody. “Steve’s Revenge” in contrast, is a full on assault that pushes the trio into a toe-tapping frenzy and one of the best displays of ensemble interplay on the disc. Two alternate extended takes of “Blues for KB,” which also appears on Nell’s 1991 recording Why I Like Coffee close out the disc. The former take is one punctuated by fiery improvisation while the latter track is a more linear, straight-up performance. Overall Nell and his trio would be welcome in any jazz nightclub across the country to convey their take on the modern jazz trio.