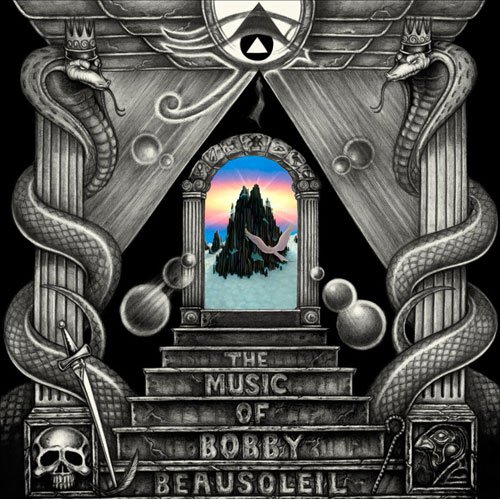 Subtitled Original Soundtrack and Sessions Anthology, this four disc set contains everything that was recorded for the Kenneth Anger film, whether used in that film or not. The collaboration began in the spring of 1967 in San Francisco’s Haight Ashbury, when filmmaker Anger saw a live performance by Beausoleil’s then-band The Orkustra, and asked Beausoleil if he would play the part of Lucifer in his upcoming film. Beausoleil countered with an offer to play the part, if he could also create the musical soundtrack for the film, and Anger agreed. The other members of the Orkustra were not so interested, which led to Beausoleil forming a new band called The Magick Powerhouse of Oz explicitly to create the soundtrack for the film. By the summer of ’67 the material was being rehearsed in preparation for a live performance that would take place at the Straight Theater in October. The performance took place, but shortly after Beausoleil and Anger would have a falling out, and the Magick Powerhouse would subsequently disintegrate, all coincident with the implosion of the San Francisco love movement. Fortunately one of the rehearsals from August ’67 survived on tape, a 24-minute very avant-garde piece that was originally set to be the soundtrack for the film, and is included here on disc one.

Beausoleil went back to Los Angeles, got mixed up with the wrong crowd, and a year or-so later ended up in prison for killing a man. Meanwhile, Anger had gone back to New York, and eventually to London, where he eventually found some financial backing and re-started the Lucifer Rising project, this time with guitarist Jimmy Page tapped for the soundtrack, but after a couple years Page had produced nothing usable, and he and Anger parted ways. Hearing of this, Beausoleil contacted Anger (who had since returned to New York) and re-offered his services in completing the soundtrack, which Anger agreed to, although accomplishing this from inside the prison would be a formidable task; but with the sponsorship of a teacher there and the blessing of the warden, plus a few thousand coming from Anger for equipment, Beausoleil was able to assemble a group of capable players from inside the prison, which he dubbed The Freedom Orchestra, to rehearse and record the 45 minutes of music required for the film. Due to various problematic circumstances (exhaustively detailed in the comprehensive liner notes), that recording process ultimately took several years to complete, and then additional time to edit the several hours of multi-track recordings down to a final mix.

That final edited mix that was used for the motion picture soundtrack takes up the entirety of disc four of this set. The balance of disc one, and all of discs two and three (102 minutes total) contain the original recordings by Beausoleil and the Freedom Orchestra, recorded from 1976-79, a purely instrumental set of twelve cuts that traverse intense psychedelic rock, blues, touches of jazz and funk, and other styles, ranging from short pieces of only a few minutes, all the way up to the sprawling “Beacon,” which closes disc three at close to 22 minutes. The instrumentation ranges from guitar, slide guitar, bass, Fender Rhodes, drums, tenor sax, and trumpet, as well as prison-built keyboards, guitars, guitar synthesizers, and various special effects. During the writing, rehearsals, and recordings, there was little communication with Anger, so all musical direction was left to Beausoleil, and because the film had no clear cut story line, Beausoleil made it his task to tell the the story of Lucifer through the idiom of music, drawing heavily on his own troubled life experiences and the turmoil and conflicts of prison life, hitting the mark on several levels. The overall result is at once powerful and effective, sometimes foreboding and at other times muscular and aggressive, not quite like anything else out there, but clearly hinting at a late-60s to mid-70s emotional aura. Add to this a lengthy 24 page booklet with comprehensive documentation and liners by Beausoleil and others, two posters, all housed in a clamshell style box. This has been available as a 4 LP set for a few years already, but this package completes its long-awaited release on CD.