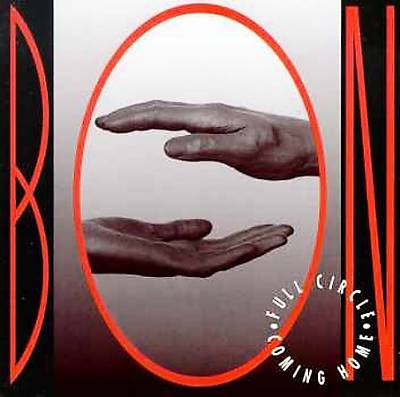 Though guitarist Bon Lozaga may be remembered by some for his contributions to Gong's Expresso II album, and bassist Hansford Rowe was indeed a prominent member of Pierre Moerlen's Gong, Full Circle - Coming Home is hardly an album reminiscent of Gong. In fact only one tune, "Going, Going, Gong," gives an overt nod to that portion of their musical past. Instead, Full Circle proves to be a solid yet relaxed fusion album featuring Bon's atmospheric compositions and nimble playing. Though Lozaga is the featured player, Full Circle is very much a group effort, featuring a well-balanced sound and solid contributions from all the performers. The emphasis seems to be as much on Bon's ensemble writing as it is on his significant soloing skills. Lozaga and Rowe are joined by drummer Vic Stevens, as well as several guest musicians on various tracks, and together the group creates an airy and laid-back atmosphere which permeates the entire album. Bon's fluid, legato soloing style is somewhat reminiscent of the likes of Allan Holdsworth and David Torn, blending lightning runs with soaring, diving sustained notes. Equally notable is his delicate, clean background work, providing supple backdrops for both his own leads as well as solos by Rowe and saxophonist Bob Quaile. The ten pieces on this album are for the most part mellow and moody, sporadically interrupted by more intense and energetic outbursts. Most of Lozaga's writing is quite good, and only a few of the tunes are noticeably weaker than the rest. Overall Full Circle has a similar effect to that of Jean-Pascal Boffo's Nomades; solid yet tastefully restrained guitar work accompanied by excellent ensemble playing, creating and sustaining a specific mood and atmosphere throughout the album. It may not be one of the very best in the genre, but Bon's debut album is both an enjoyable and promising recording. Fusion guitar fans especially should find this one worth their while.