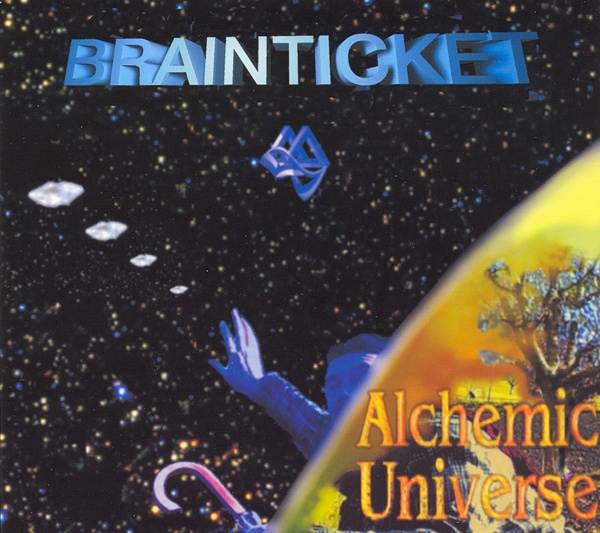 Alchemic Universe is more or less the work of Joel Vandroogenbroeck (recording under the name of “Mystery Hologram A-U-rchestra”), with some spoken vocals by Carole Muriel. The text, by Lance Banda, tends to the new-agey (“Where have I been all my life?”). The keyboards combine digital and analog sounds, and the programmed percussion parts vary widely, from conventional drums to highly processed noises. There’s even a brief interlude of cocktail piano accompanied by strange sound effects in the second track, “Transformation of a Stream.” While Brainticket would certainly have to be classified as electronic music, it doesn’t sound much like current electronica – there are no endless arpeggios and thumping kick drums here, though an occasional quick edit or 32nd note fill shows awareness of current trends. There are definite nods to space rock (with echoing swoops and tinkles), new age (with silky pads of chords, breathy flute melodies, and philosophical-sounding narration), progressive (with complex multipart arrangements) and experimental (with some lengthy sections of knob-twiddling). The recording is very clear and expansive, avoiding the sterile, contrived sound of many one-man-band projects. Vandroogenbroeck has an interesting take on the keyboard solo artist category, and my only real complaint is that there are a few of the analog effects jump out of the mix a bit too harshly.