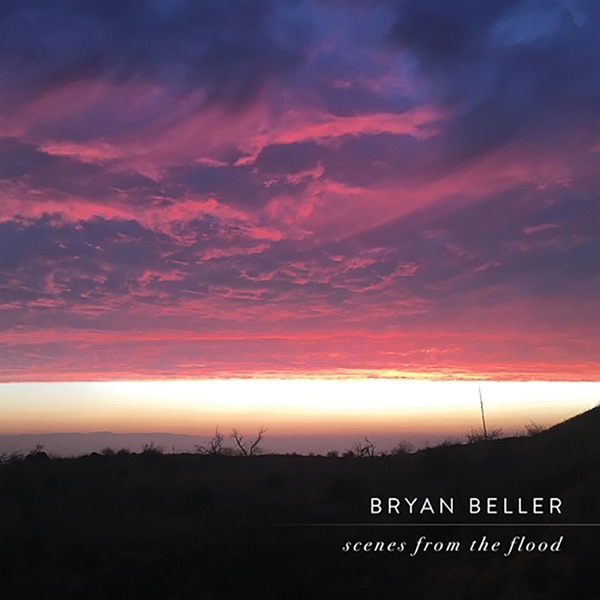 As the bassist with The Aristocrats and Mike Keneally’s band, not to mention other work with Joe Satriani, Dweezil Zappa, Steve Vai, and many more, Bryan Beller is no stranger to complex and intense progressive rock, but his solo career has taken a back seat to his contributions to others’ albums and tours. Scenes from the Flood is only his third studio album with his name by itself, and it’s a 2CD concept album featuring a wide variety of guests. Beller himself covers bass, guitar, keyboards, vocals, and drum programming at various times throughout the set, but gets help from a stellar crew of guests (Keneally, Satriani, Guthrie Govan, Joe Travers, Rick Musallam, Gene Hoglan, Griff Peters, Jane Feder, John Petrucci, Nili Brosh, Julian Coryell, and more) many of whom are associates from the Mike Keneally Band, Dethklok, The Aristocrats, and so on. Scenes from the Flood consists of 17 tracks, mostly instrumental, with a fair range of style, from solo guitar interludes less than two minutes long to blasts of electronic rock to fusion workouts to some very lovely melodic pieces. Everything is superbly played, and the compositions hold interest — though I’ll admit that digesting the whole thing in one sitting is a bit much. Aside from some spoken parts (“Everything and Nothing”) and a bit of screaming (“Army of the Black Rectangles”), the only real vocal track is “Angles and Exits,” which features a good vocal performance by Julian Coryell (yes, the son of Larry Coryell). It comes off a bit like a slow-burn Porcupine Tree tune, and works quite well in the context of the album. Another high point is “World Class,” with some nice sitar from Rishabh Seen, Nili Brosh on lead guitar, and strings from Paul Cartwright. It’s got more than a touch of Mahavishnu complexity filtered through a more rock-oriented lens, and kicks serious butt. Scenes from the Flood has everything needed to appeal to fans of modern progressive rock, as long as they don’t insist on vocals on every track.

Ruby - Short-Staffed at the Gene Pool + Altered & Proud – A whole new genre has developed since about 1995, one that consists basically of a soft-voiced female singer and a programmer / keyboardist / arranger. It probably started with Portishead, then grew...  (2001) » Read more