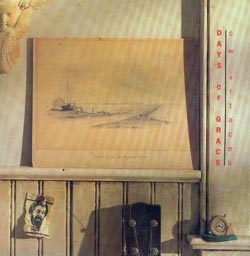 Try tackling a review for a project like this and inevitably you end up with blank pages and a headache brought on by acute frustration. Whenever I listen to music of a very personal, experimental nature, I get the notion that the composer intended some sort of significance conferred upon it that to a listener wouldn't be readily apparent without the aid of commentary and explanatory notes. Often one can scarcely infer how much of the music's aggregate is pre-planned, or when chance operations are playing their role. Days of Grace is precisely one of those cases. This CD release contains approximately the entirety of CW Vrtacek's first two solo albums, Victory through Grace and Days and Days, from 1981 and 1982, respectively. At this time the Tascam 4-track tape machine had made its debut, spawning a whole host of home-recording heretics, bent on subverting the hegemony held over the music world by big-time record companies. Is it difficult to picture Vrtacek at home in his bedroom-cum-laboratory, surrounded by instruments and equipment, living out a sort of musical mad-scientist scenario as he concocts his peculiar brand of curios? Shouldn't be.

Vrtacek uses primarily guitar, hand drums and percussion, and tape-manipulation. His compositions are short, terse, and to the point; almost like brief samples or unfinished soundtracks, each piece a sonic interpretation of a landscape, weather conditions, the passing of clouds, etc. I'm repeatedly reminded of nature, of the outdoors. For reference points I would cite Magical Power Mako's Music from Heaven or Bill Nelson's Sounding the Ritual Echo. Notice I didn't say "influences," as I don't imply that at all. Most of the trademark virtues (or perhaps vices, depending on how you see it) of the home-recording artist are present, mixed and processed so that performed material, and source tape material coalesce into a potpourri: overlapping phrases a la Charles Ives; spliced-in found voices such like Holger Czukay pioneered; musique-concrète techniques; and more. At times the voices interrupt my enjoyment of the music's otherwise abstract nature, but readily apparent it is that he can actually play his instruments, and is not merely some clever clown fiddling with knobs and buttons. Guitar is obviously the main weapon of choice and his total command over it serves the soloing and melodic work, while Middle-Eastern percussion trinkets such as dumbek (or what sounds like it) create a ritualistic underpinning. He also seems to love coaxing a pseudo-Arabic sensation out of his primitive synths, and violin. Yes this was about the time digital was sweeping the world, but you won't find DX7's here. Days of Grace sits at that irresolute junction where the primeval meets the Eastern, and the modern.