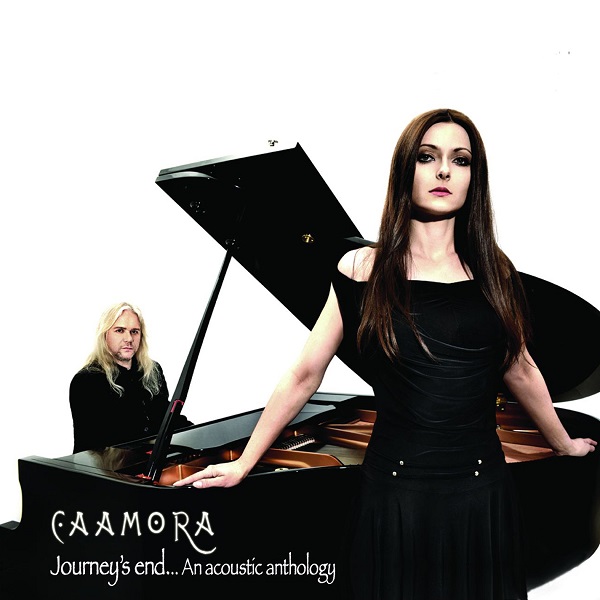 To recap: Caamora is the musical partnership of Clive Nolan (Arena, Pendragon, Strangers on a Train, etc.) and Polish singer Agnieszka Swita. Last year they recorded an original musical theatre score based on H. Rider Haggard’s story She. They also performed the work live in Poland, captured on DVD. Stylistically the music of Caamora is a cross between the bombastic symphonic prog of Nolan’s various bands and Andrew Lloyd Webber's Phantom of the Opera. This two-disk set follows Nolan and Swita on the road, performing songs from She, as well as other tunes from Nolan’s repertoire, to audiences in Europe and South America. In some instances Nolan and Swita perform as a duo, though in other locations they are joined by guest performers, including Christine Booth on “The Bonding” and Argentinean singer Medina on “Salamander.” In Chile, Claudio Momberg (keys) and José Luis Ramos (bass) guest on several tracks, delivering the fullest band sound on the collection. But whether other musicians are present or not, the songs generally succeed because they were developed as voice and piano pieces from the get-go, so any additional instrumentation merely fleshes out the essentials. At their core the melodies and vocal lines are well written, so the listener simply gets a nice variety of treatments depending on who’s on stage. Swita is uniformly solid in her delivery, as is Nolan even though he lacks her chops or range. But in duet mode they harmonize well and the performances are sincere. The audience responses are enthusiastic, so for those who couldn’t catch Caamora on stage this set will make sure you don’t feel left out. As an extra inducement, She demos, tracks from previously released EPs (including Swita’s gorgeous “Grunwald” and the Enya-like “In Aeternum”) are included, along with a lengthy radio interview.