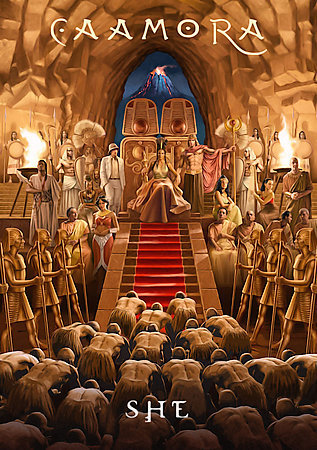 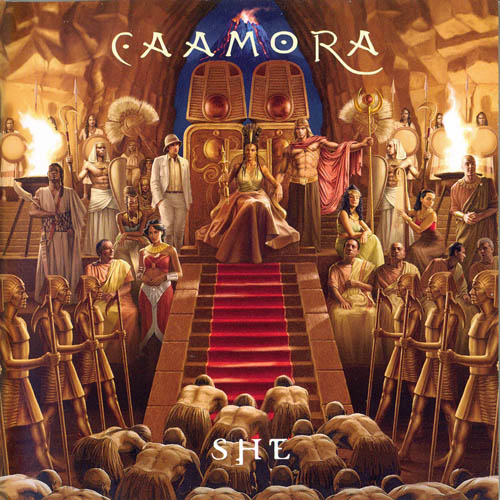 Clive Nolan (Arena, Shadowlands, Pendragon, etc.) rarely does anything on a small scale, and elements of theatricality and drama have appeared in much of his past work so it seems only natural that he’d eventually tackle something on the scale of a West End musical. Caamora is the entity formed by Nolan and Polish singer Agnieszka Swita and She is their collaboration based on H. Rider Haggard’s book (also immortalized in a 1965 Hammer film Nolan saw as a boy). When I first heard about She I was dreading the results, though in all honesty this is one of Nolan’s finest moments and should find favor among fans of his other projects and bands. Musically, She includes material similar to the sort of symphonic prog-metal Nolan has favored throughout his career, though the many songs spanning the two disks also cover pop-rock (“Covenant of Faith,” “Shadows”), hard rock (“The Veil,” “Embrace the Fire”), orchestral pop (“Vigil,” “The Night Before”) plus purely orchestral numbers (“The Lost City”). Vocals play a larger part than in Nolan’s prog rock efforts, and for these duties Christina Booth (Magenta) and Alan Reed (Pallas) have been enlisted to help round out the cast. This could have been a problematic area for this project but credit should be given for fine performances all around. It helps that the songwriting is uniformly strong and I’m impressed by Nolan’s ability to wield potent melodic lines and graft them to hook-driven arrangements that make strong statements without overstaying their welcome – an ability he rarely demonstrates in his prog rock writing. Sure, there are moments when the bombast gets pushed, especially when the storyline climaxes on disk two, but when seen in context of the story arc these moments make sense. I’m not sure She is something I’d personally throw on regularly since this kind of Andrew Lloyd Weber-meets-Arena type of thing isn’t necessarily my cup of tea. But in terms of Clive Nolan’s long and prolific career, She has to be seen as a pinnacle accomplishment and has changed my mind about the scope of his talents and abilities. The companion DVD presents She in a stage production, performed at the Wyspianksi Theatre in Katowice, Poland on October 31, 2007. Ambitious is the best adjective to describe the undertaking, though that doesn’t necessarily mean it was a complete success. Musically everything that worked for the CD is still working here, with the star of the program Nolan’s marathon stable of well-written songs. Besides Nolan and Swita, Alan Reed and Christina Booth reprise their parts, aided by a choir who also appear on stage when dictated by the story (though I’m pretty sure that at least some of the DVD soundtrack is studio overdubs). Finally, a sizeable live band (bass, two guitars, drums, two keyboardists, oboe, horn, and cello) consume significant real estate on the Wyspianksi’s small stage, giving the actors only the front and back plus a narrow space between the two halves of the band to perform with. They make the best of it, though this is the production’s weak link and where the troupe’s lack of experience is revealed. Swita has a natural grasp of performing on stage and Reed holds his own, though Booth and Nolan seem to be improvising much of the time and some direction would have helped. This is especially the case during key scenes that for some reason take place at the rear of the stage that, lacking strong lighting and obscured by all the musicians, could not have been easy for some in the audience to see. Other technical weaknesses (wardrobe, make-up, rear-screen visuals, etc.) were no doubt a result of budgetary restrictions and I can cut the production some slack, though if they do plan on taking this show on the road to South America, as is planned at the time of this writing, some further work in these areas won’t go unrewarded. This is a show with potential, simply because the music is stronger than half of Andrew Lloyd Weber’s recent work. If the stage performances and production values can be brought on par who knows where it will end up?

Michael Manring - Soliloquy – Michael Manring is simply one of the best bassists playing today. You should have heard about him from his many contributions to new age recordings in the 80s to fusion workouts with Attention Deficit...  (2006) » Read more