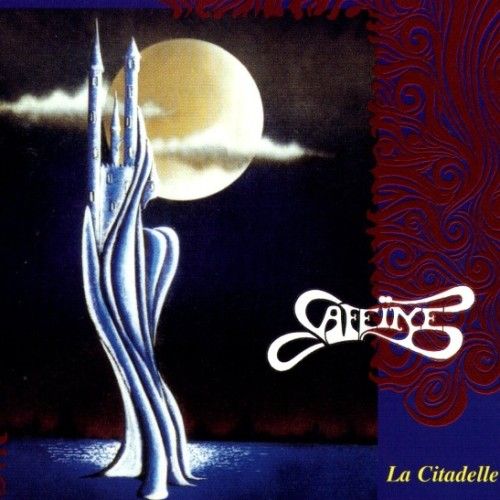 Cafeine is a new band from France offering a nuanced music based mainly on keyboards and guitar. Melodic, La Citadelle offers seven compositions, three of them being in the ten to fifteen minutes range. What makes this debut album a good one is the quality of the playing and the compostional integrity. There are vocals, sung in French, and when these are present, the band shifts in a more standard mode, offering a door through which people less familiar with progressive rock can explore. At times the vocals may remind a bit of the phrasing used by German singer Herbert Groenemeyer (on "April Theme" for instance). The numerous instrumental passages shows an expressive and subtle quality even veering into orchestral bits at times. To the core combo of keys, guitar, vox, bass, and drums are added along the way oboe, flute, sitar, tablas, charengo, and uillean pipes, adding color and texture. The first piece, the 11:25 minute "La Cour des miracles" ("The Court of Miracles") offers a mix of vocals sung over a more standard backdrop and long instrumental passages in which the guitar is prominent. The lyrical contents is of social nature, depicting a character living in an 'inner city' where kids have no future, where crime and prostitution is rampant. It starts off like a theatrical play, with a Renaissance-era theme played on the keyboards, then afterwards taken by the band, suggesting a past-to-present bridge underlining the ever-present human misery that any form of progress hasn't yet solved. But this is no dark or gloomy music. Rather, it's quite open and clear in its harmonies. Patrick Jobard's guitar work is mainly melodic, rendered with feeling. La Citadelle is a very nice group effort, a promising debut for this new, young French band.

I'd first heard of these guys a few months ago via their contribution to the A Propos d'Ange compilation, their song being one of the highlights of that disc. La Citadelle is the band's debut album, and it certainly lives up to all the expectations — four lengthy multi-part compositions rounded out by two shorter instrumental tracks, Cafeine have managed to create a uniquely French symphonic sound rooted in the great traditions of Ange, Atoll, and Mona Lisa, while remaining modern and true to the 90s. A five piece with dedicated vocalist, the band's main mover appears to be keyboardist Christoph Houssin, who had a hand in penning all of the album's tunes. Additional musicians add oboe, flute, sitar, and uillean pipes. Steering clear of the neo-progressive typicalities that seem to be haunting many of the new bands of the day, Cafeine's music delivers the goods with strength and purpose, and without too much of the pompous gratuitous nonsense that bands attempt to pass off as complexity. Yes, there are plenty of twists, turns, and changes, but everything contributes to the greater vision of the whole piece. Sure, there are a few rough edges, what debut album is perfect — but Cafeine is clearly one of France's most promising new bands.

Jeff Sherman - Gauguin – Jeff Sherman’s role in the resurgence of Northwest band Glass has been nothing short of surprising. First by bringing the band back together from obscurity (the trio has now released two archive...  (2006) » Read more

Exclusive Raja - Insubmersible – Insubmersible is Exclusive Raja's second album and is a step onward from their debut, Off the Map, of three years ago. This eclectic band shows musical influences of such disparate artists as King...  (1996) » Read more

Steve Roach - Dreamtime Return – The myths and legends of the Australian Aborigines provided the inspiration for this expansive opus that is generally touted as Roach’s first masterpiece. Here it is presented again in 24-bit...  (2006) » Read more