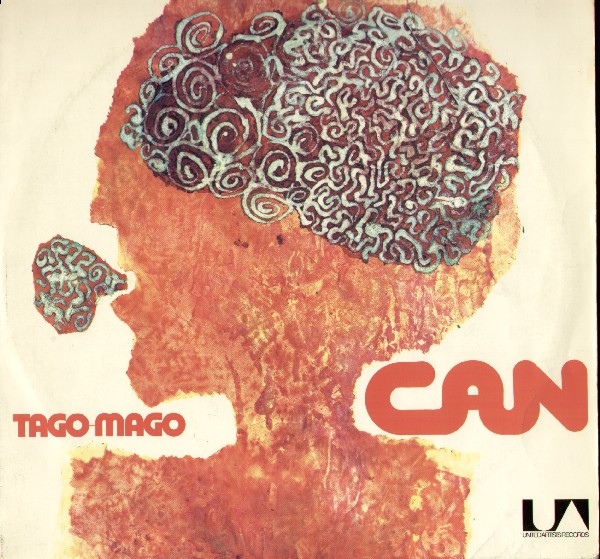 The first Can I heard when I was in high school was Future Days. At the time, finding any of the earlier albums wasn't particularly easy, so I had to wait until the band's first reissue wave to finally hear Tago Mago, which already had a legendary reputation. It's a bit weird talking about this, as the most recent Can to my ears is the phenomenal 3CD Lost Tapes, which was like a gift when it came out, all these incredible outtakes that hadn't been heard for years thanks to the band's largely improvisational style — it spent months in my rotation. Tago Mago did really live up to the hype when I first heard it. It's a child of the psychedelic era, like a lot of music from the early 80s, but what Can did with those influences was completely different from a lot of their contemporaries. Some of it was Damo Suzuki's stream of consciousness vocals, some of it was the extremely tight, incessant drumming, and I think a lot of it was also the need to experiment with the instrumental tones in and out of the studio and the music post recording. In a way it's not really surprising that the album Ege Bamyasi followed, with its almost pop-like lengths and tighter songs, as Tago Mago was quite sprawling and at times exceedingly experimental and strange, almost exhaustingly so in places. I'm not even sure you'd normally call Can a cosmic band but they definitely went to some timeless places on this album. I'd guess everyone probably has a different favorite Can album but with songs like "Paperhouse," "Mushroom," and the fantastic "Halleluwah" this one will always be mine.

The 40th Anniversary version of Tago Mago (an album I wrote about in my second tier) came out in 2011 as a 2CD limited edition and disappeared soon thereafter, unfortunately in this time period I didn't even know it existed and it has appreciated considerably. Can was one of those groups with an extensive archive of live and studio material, we've had Lost Tapes and BBC Sessions and lots of stuff from the Can Box and then there's also a wealth of video material — and honestly most of it's quite amazing. Like the Grateful Dead, Can never really played any composition the same way twice and on the second disc of this set you're given three live 1972 pieces in extraordinary quality sound, including a 30 minute "Spoon." It's clear the band was at quite a peak by this point in their career, wildly experimental yet quite tight at the same time. The only wonder is why this disc wasn't filled out a bit more, but perhaps anything more would have detracted from the power of this music.

Geordie Haley’s Every Time Band - The Green Suite and Other Stories – Formerly of Fredericton’s tiny music scene, jazz guitarist Geordie Haley now takes up residence in Toronto with the Every Time Band. The line-up is rounded out with vocals, drums, bass, sax, and...  (2006) » Read more

Bz Bz Ueu - Uhozmerigotz – I’ll admit a slight prejudice against bands with unpronounceable (or questionably pronounceable) names, but a brief review is probably not the time to get into a discussion of the philosophy of...  (2002) » Read more

Airborne - Walk on Water – Lead vocalist Baggi Buchmann was a prominent contributor to German keyboardist Ines' Hunting the Fox album a couple years ago. Here he is featured with his regular band, a five piece including two...  (1996) » Read more

The Cheebacabra - Exile in the Woods – The Cheebacabra is a project driven by keyboardist and producer Cheeba, where funky grooves meet overtly synthetic melodic interplay and a cool jazz feel over a steady, mostly programmed drum beat....  (2007) » Read more

NR Hills - Eleven Nails in the Coffin – These pieces originally appeared on English composer and musician N.R. Hill’s first three (now deleted) albums: Romeo & the Beast, Nails, and The Triumph of Death. With this compilation he...  (2008) » Read more