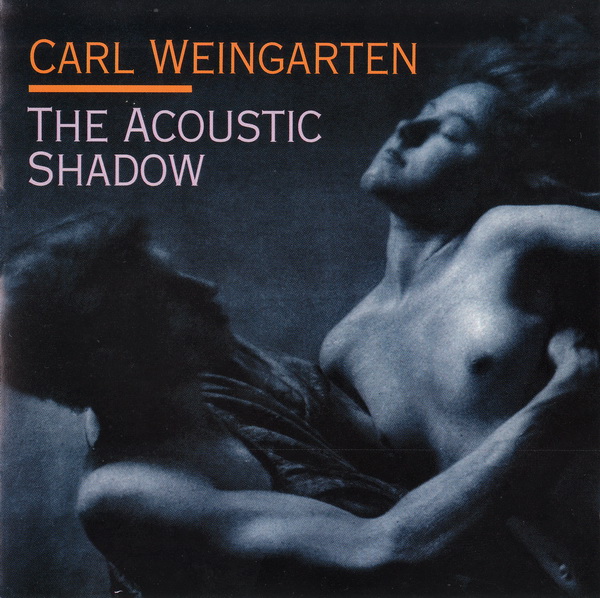 What a treat this is. Weingarten is perhaps best known for his skills on the dobro (acoustic slide guitar played on the lap), he has a startling depth to his musical vision as well. The entire album feels like a mysterious and supernatural story being told (without words). It's moody, engaging, and well-balanced. It's atmospheric, melodic, and percussive. It's as much electric as it is acoustic. Djam Karet fans will know Weingarten's name from their Collaborator album, and will find The Acoustic Shadow is equally as well done. Kit Watkins guests on three tracks, including the cerebral title track. Weingarten's performance goes way beyond the dobro here, into sequencing, tape effects, electric guitars, synths, and even vibes. Deep, emotional, varied, and passionate. Highly recommended, and surely one of the ten best releases that will be heard this year.

For fifteen years or so, guitarist Carl Weingarten has been active, releasing several albums under his own name, and collaborating on several more with the likes of Joe Venegoni, Kit Watkins, Walter Whitney, and Djam Karet. While best known for his trademark slide guitar treatments, his playing elevates the solo guitarist to the status of one-man-band, while crossing cultural boundaries and offering soundscapes rich in mystery and suspense. In the most basic sense, his work might occupy a position somewhere along the axis between Michael Hedges and Steve Tibbetts, yet neither of these artists fully conveys the expanse of Weingarten's world. The Acoustic Shadow is a soundtrack in the truest sense, yet most of the details of the story are left purely to the imagination. The story line begins with the sound of the author typing, a tropical rainstorm in the background, and some vague chanting in the distance. As the typing fades, the sound of a helicopter overtakes it, along with other sound effects that might lead the listener to believe the story takes place in southeast Asia. Also alluding to this are the song titles like "Petite Village," "Cambodian Waltz," and "Fire in the Temple." To further fuel the mystery, the tri-fold booklet contains a photo of some kind of UFO. A science-fiction twist, maybe?

The first song as such is "Secret Agent," a powerful workout for multi-guitars, bass, and hand drums, with Weingarten's trademark slide offering the first solo and guest violin and cello adding additional textures. Here, as on most of the other tracks, Weingarten uses a variety of guest musicians as required to achieve the necessary results. Guests include Joe Venegoni, Kit Watkins, Dan Reiter, Barbara Else, and others. Most of the tracks segue into one another, and some – such as "Petite Village" offer cultural authenticity via samples of the traditional instruments, and in that sense the effect often approaches the work of groups like Do'a and Ancient Future. These traditional interludes are scattered throughout the album, further supporting the notion of a story line. One of the most unusual tracks here is "Daughter of the Monk," an intriguing percussive workout supporting flute, cello, Stick bass, and eerie sampled voices. With "A Promise Kept," we return to the sounds of typewriter, manuscript and the rain. "Kathryn Finds the Letter" seems slightly detached from the rest of the story, yet closes the album nicely. In all, Weingarten has pulled out all the stops and produced a brilliant and cohesive instrumental concept album that sets new standards. This is surely an album that most will enjoy – a mystical adventure that can be enjoyed on many levels, as you plot the script with your imagination. My highest recommendation.

The Acoustic Shadow is presented by Carl Weingarten as a sort of soundtrack to a lost story. Giving enigmatic and ambiguous track titles and utilizing everything from non-western folk instruments to samples and synthesizers to create evocative sonic landscapes, Weingarten challenges the listener to fill in their own salient details to the skeleton story line. In reality, one can thoroughly appreciate this album without even being aware of this intriguing concept, but the active search for contextual clues in the music will inevitably lead the listener deeper into the rich subtleties of the moods and atmospheres created here. Weingarten's guitar playing serves as one of the unifying elements of the album, ranging from delicate classical-styled work to ambient and droning effects laden electric sounds. His music effortlessly blends African rhythms and various folk musics with a prominent, but not overpowering, western technological influence. A rotating cast of musicians make contributions on many of the 18 tracks here, imparting a dynamic variety to the story's abstract details. The Acoustic Shadow proves to be a fine, rewarding listen for anyone interested in electronic and world musics.