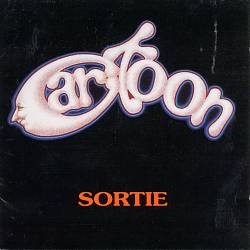 The end of the 70s and first years of the 80s were a defining time in the history of progressive rock. The dinosaurs that had dominated throughout the first half of the 70s were rapidly becoming a major embarrassment to the cause as they released substandard albums like Duke, Tormato, and Love Beach. There was no big nostalgia movement afoot yet to try and follow in their footsteps (Marillion and IQ were still learning how to play). At the same time, though, movements were afoot in Europe and the UK, from which a powerful new progressive ethic was being born: witness Art Bears, Urban Sax, Art Zoyd, Zamla, Univers Zero, and so on... very different and separate from all that had gone down before. And on the American side of the water, bands like the Muffins, Chrome, Mars Everywhere, and Cartoon were offering up an entirely new perspective as well. Sortie combines both of Cartoon's studio albums Cartoon and Music from Left Field (minus one track) on a single disc. Cartoon's music could be described as a mixture of rock, jazz elements, improvisation and avant-garde with a healthy injection of classical music. The original lineup was a three-piece of keyboards, guitars and drums, but for most of their career they were a five-piece with woodwinds and violins added. Complexity was their trademark, as well as the seemingly incongruous juxtaposition of styles within their reach, and first-rate musicianship. The first album is the more accessible of the two, accounting for tracks 1-7; here is where rock makes its strongest appearance, and improvisation (at least it seems) is minimal - the songs are tightly arranged and executed with precision. With the second album (tracks 8-12, with "Trio" left off), the band moves into more experimental territory, with more use of dissonance and improvisation; for the most part it works, but at times the neo-classical improvs get a mite tedious. Still, it's all approached with a good sense of humor and an adventurous spirit. Cartoon's music does take time to absorb, it's not catchy and hook-ridden, so it may take a listen or two to reach full appreciation, but there's plenty here to hold your interest.