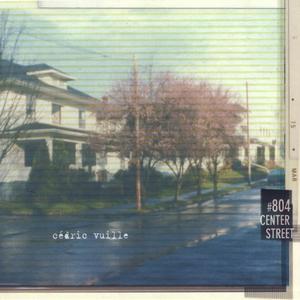 A founding member of the Swiss ensemble Debile Menthol, then of L’Ensemble Rayé, Cédric Vuille is an accomplished multi-instrumentalist. In the liner notes he writes about when, at age 17 and already bearing a strong passion for music, he was able to live in Oregon City as an exchange student for one year in 1974-75, where he absorbed and was in turn influenced by a number of the San Francisco bands, but in particular the album Quah by Jefferson Airplane / Hot Tuna guitarist Jorma Kaukonen and associate Tom Hobson. That finger picking influence is evident on a number of the fourteen instrumental pieces here, but no more so than on “The Letter,” a beautiful and harmonically diverse piece for multiple guitars and bass clarinet that is at once rich, warm, gentle, and blistering, and very Jorma. Throughout, Vuille plays a variety of guitars, ukulele, banjolele, valiha, slide-khabossa, bantar, sitar, bass, theremin, kalimba, clarinet, keyboards, and a variety of percussion. He is joined on a track-depending basis by his Ensemble Rayé guitar-playing cohorts Jean-20 Huguenin and Julien Baillod, and drummer Daniel Spahni, plus Peter Schmid on a variety of woodwinds. The journey from the opening track to the closer is a mighty fun ride, crossing a lot of musical territory citing influences from blues, rock, bluegrass, country, folk, jazz, swing and beyond, but all arranged such that for the most part it completely eschews comparison. Brilliant and playful, 804 Center Street is a minor masterpiece that I highly recommend.