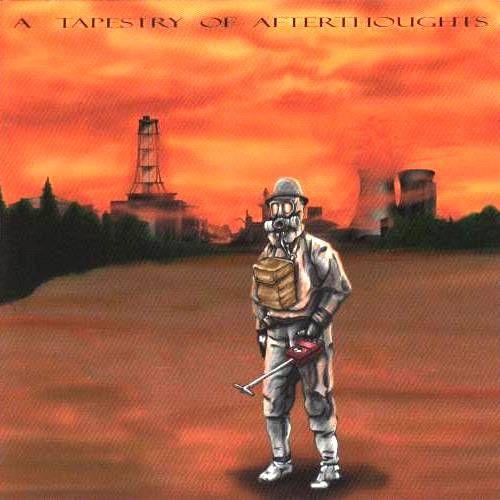 When I first saw the cover of this CD, with its hazmat suited figure amid a grim orange cloud, nuclear plants in the background, I guessed I was in for some gloomy harsh stuff. Then I saw the album’s title, a decidedly non-industrial phrase, and didn’t know what to think. It took quite a few listens before I realized what A Tapestry of Afterthoughts reminded me of, but once I hit on it, I couldn’t shake it. Genesis, circa Trespass, a period of the band not much emulated. The comparison is a bit unfair to Chaos Code since the music doesn’t really sound that derivative, and the lead guitar has more Dave Gilmour than Anthony Phillips. In addition to the guitar, the four-piece features a mixture of acoustic and electric instruments including Chapman Stick and flute plus vocals. The band’s general style involves quiet moments with flute melodies backed by acoustic guitar or electric piano, then louder sections with electric guitar, drums and Stick or bass. Some of the arrangements have very angular lines. The recording quality is a bit muddy in the low end, and the drums sound a bit flat, but Chaos Code shows a lot of promise, full of good ideas well executed.

Pack Your Bags for an Astral Trip