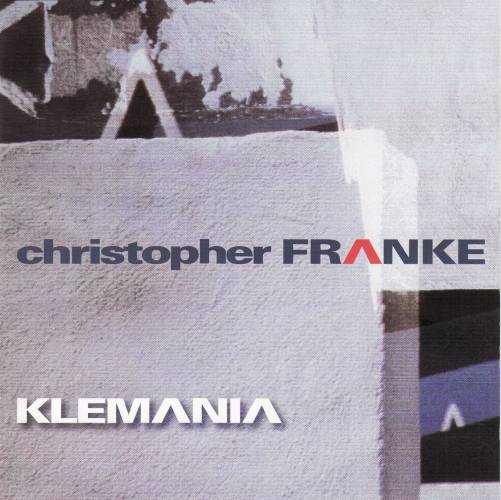 Apparently a special recording to celebrate KLEM day, an electronic music festival in the Netherlands, Franke's Klemania album is both a pleasant surprise and a disappointment. I hate to judge Franke's work in comparison to his Tangerine Dream output, but in this case it's almost a necessity as a point of reference. In many ways, Franke's recent solo work has been miles ahead of what his old group has done since he left. On his last live disc, Franke interspersed his early 80s Tangerine Dream compositions with some of his own, newer ones to create an album of vibrant, dynamic electronic music. Looking at this disc's track list, it looks almost like an old Dream release: two 20+ minute (ahem, side-long) cuts and a wee short one tacked on at the end. In fact, skimming the disc, they sound a lot like old Tangerine Dream tracks: the first, "Scattered Thoughts of a Canyon Flight," starts with dark, brooding electronic textures before the composition develops, and "Inside the Morphing Space" begins with a lively sequence that wouldn't be out of place on Tangram. But the tracks never develop. A 20+ minute track needs a unifying theme, else it becomes a series of songs patched together. The two long tracks on Klemania seem to be ideas thrown together rather haphazardly, rather than cohesive wholes. Franke tries to fuse a variety styles together here as well, and doesn't quite pull it off. After the ominous intro of "Scattered Thoughts...", Franke launches into all-out... techno! He then proceeds to try to redeem the track with a great intense passage that starts about 11 minutes into the cut, but overall, this disorganization reflects on the overall direction of this disc. Outside influences like the aforementioned techno and some of his soundtrack work mar an otherwise ambitious work: some of the bits sound like they wouldn't be out of place on Babylon 5. And the stock pan-flute sample we heard on the Legend soundtrack is used ad nauseam in the quiet passages. A minor point, yet it does affect the overall flavor. What could otherwise be a fantastic record is spoiled by a few passages that completely disrupt the flow of the music as well as a general lack of themes to the longer cuts. Not even Franke's mastery of his electronics rescue some of the material from the domain of cheese. And ultimately, even exquisitely rafted cheesy bits remain... cheesy bits. Worth checking out, but not essential.