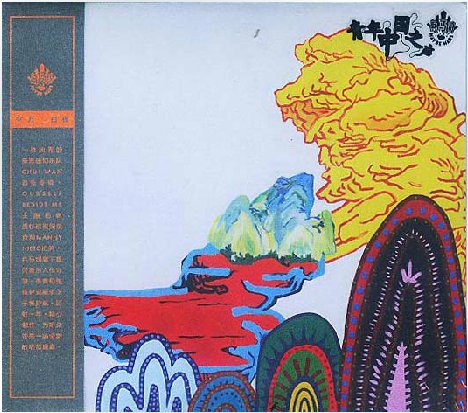 Seems like most of the bands coming out of China these days fall into one of two camps: they're either noisy art-punk or post-rock. There are also straight-edge punk bands, metal bands, and others, but I seem to encounter them less often. Chui Wan is a relatively new entity, formed in 2010, and they fit only very loosely into the post-rock bin. There's a heavy dose of psychedelia in their sound, and lots of influences from around the world, particularly the Middle East (as on this CD's title track). The guitar is sometimes very noisy, with that Sonic Youth inspired wall of sound so many Chinese bands favor, but more often, it is keyboards and electronic sounds that dominate. I haven't heard much from this corner of the globe that could be called space rock, but at times Chui Wan qualifies, with trippy synthesizers echoing off into the ether. I think the vocals are in Chinese and English at various times, though they're so buried in the mix that it's hard to tell — this band is about sounds, and words are of interest only insofar as they are sounds. "Another Kind of Love" is a perfect example, with its sunny psychedelic mood and chiming guitar arpeggios; a catchy melody is sung, but wrapped in so much reverb only an occasional word is discernable. The CD finishes off with "Mingri Weizhi," at over ten minutes by far the longest track. The name could be translated "Tomorrow Never Knows," but it doesn't seem to be related to the Beatles tune (other than having a a droning background and similar tempo). The band has the good sense to break up the track with lulls in the rhythm. With its guitar feedback, echoing keyboard, and chanted vocals, it's a little trip on the road paved by Acid Mothers Temple, though without sounding derivative. My only real complaint is that at a mere 37 minutes, there's just too little of it!