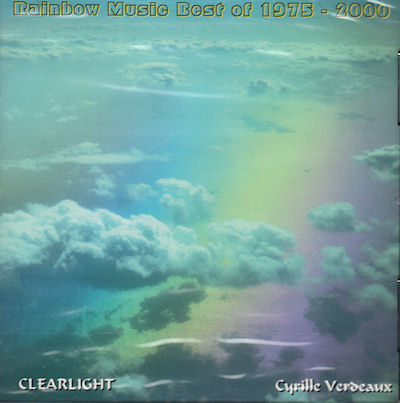 From his debut in 1973 with Clearlight Symphony, French keyboardist and composer Cyrille Verdeaux has combined impressionistic soundscapes in the spirit of Ravel and Debussy with progressive rock elements, later adding influences from many cultures around the world. This collection takes tracks from six albums under both the Clearlight moniker and his own name spanning 25 years (now available as a box set called Rainbow Music) and arranges them according to some sort of mystical scheme involving the colors of the rainbow and the auric meanings they have. I’m neither qualified nor inclined to comment on the philosophical aspect of this, but the music should provide enough interest to make such considerations irrelevant, especially if Verdeaux is to reach an audience beyond the New Age community. In retrospect, 1975’s Clearlight Visions might indeed be called New Age music (or a precursor), but for the prog fan, the presence of members of Gong and Steve Hillage’s band provides a connection worth latching onto. Music in this collection ranges from that variety of early symphonic rock to the melodic progressive workout of “Vibrato” from Messenger of the Son/Sun (spelled both ways in the liner notes) to pure New Age relaxation like tracks from Impressionist Musique and Nocturnes Digitales. A recurring theme is the use of environmental noises – burbling water, birds, trains – to accompany the music. The two tracks from Ethnicolor’s (don’t ask me why the apostrophe – that’s how he spells it) feature processed ethnic voices along the lines of Deep Forest. If the tracks were arranged chronologically, they would illuminate Verdeaux’s journey from symph-prog innovator to Euro-techno New Age savant. Or you can just program your CD player to do it for you.

Starcastle - Song of Times – The late bassist Gary Strater’s dream to create one more Starcastle record was realized in 2006 with help from his long time engineer friend Mark Rubel, along with old band members and friends. Many...  (2008) » Read more