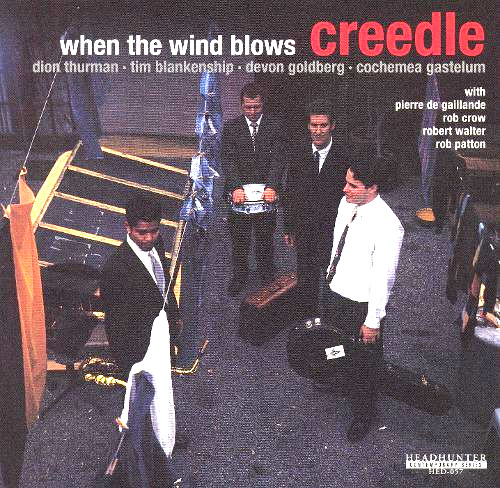 Creedle is a band that has come a long way. Their debut recording in the early 90s (Half Man, Half Pie) established them as an alternative punk band with a serious musical outlook. When the Wind Blows, their third release, takes Creedle several steps further with the addition of a lead alto sax player (Cochemea Gastellum) and vastly improved chops from the entire band. Indeed, the liner notes proclaim this album as "Creedle Goes Jazz" — a description that only partly describes the developments taking place. The pieces on this album are distinguished mainly by complex unison guitar / alto sax lines, grounded by the dexterous bass and vocals by Tim Blankship and the jazz-inflected drumming by Dion Thurman. Many of the cuts, especially "Rabbi Steinman's Happy Hour Frito Boats" and "Los Calapalos, Los Capalapalos" are entirely instrumental, incorporating many of the Hebrew-jazz idioms favored by the likes of John Zorn and Frank Zappa. The more rock-oriented tracks capitalize on Creedle's hard-edged riffing, exemplified most by the title track and "Pretty Ugly, Act I." Even on these hard-rock tracks, however, Creedle challenges the listener with impossible guitar tricks, off-kilter rhythms, and ever-shifting tempos. Fans of the Cuneiform label will definitely be delighted with this release, as will those who love aggressively-styled progressive jazz rock. This is in the running for the best new release of the year, in my opinion.