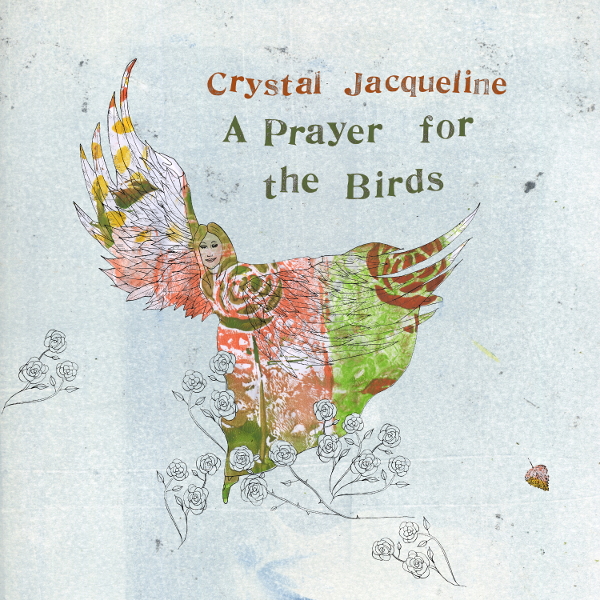 With each new release, Crystal Jacqueline solidifies her place as one of the prime current exponents of acid folk. But even aside from genre labels or comparisons with her other work, A Prayer for the Birds is a beautiful album full of great songs that are impeccably arranged, maintaining a consistent mood but shifting around in details in ways that make each track a discovery. The orchestrations are stunning, with acoustic guitar forming the core much of the time, but there are wonderful additions that add different flavors to the individual songs. “The Edge of My Garden” has Middle Eastern percussion and a string section that complement her singing perfectly. “Dorsetshire Days” features some lovely vocal arrangements; “100 Years Ago” has a very nice oboe part in addition to some tasty slide guitar; the kalimba on “First Light” provides an interesting contrast with Indian-flavored strings and percussion; six tracks in, “Arise the Sun” finally introduces some elements of rock for a rousing, jangling psych tune that touches on Jefferson Airplane and The Byrds; and I could go on and on. Not a one of these eleven songs is in any way a disappointment, and the album as a whole is a brilliant example of modern psychedelia. I can’t recommend it highly enough.

Over the past ten years Crystal Jacqueline has grown and blossomed as a singer and musician. Her latest solo album is A Prayer for the Birds, co-written with her musical and life partner Icarus Peel. A Prayer for the Birds is a rock-solid set of eleven acid folk rock songs that hearken back to the heady days of the late 60s. There is something familiar yet undefinable about the music. At times her voice reminds me of Kate Bush, but then as on “Dorsetshire Days” there is some sense of late 60s Judy Collins. And then on “First LIght” she reminds me of Sally Oldfield on Waterbearer. To augment the dreamy hypnotic tapestry of music, her voice is multi-tracked. For this album Crystal Jacqueline is joined by new backing singers Victoria Reyes and Elaine Lightfoot. In addition, Victoria plays oboe and Lizzy Wayne plays flute. Altogether they provide rich colors to the pastoral sonic palette of A Prayer for the Birds. This is music for lying in sunny flowery fields watching butterflies and birds soar in the cloudless skies, while faeries dance on the edge of perception. Though primarily A Prayer for the Birds is Crystal Jacqueline’s album, Icarus Peel and his guitar work shine through from time to time, especially on the title track and “Turn the Tide.” If you are unfamiliar with Crystal Jacqueline, A Prayer for the Birds is a great place to start exploring her world of gothic psychedelic folk.

The Revolutionary Army of the Infant Jesus - The Gift of Tears & Le Liturgie pour le Fin du Temp – RAIJ are a mysterious ensemble of musicians whose music is genuinely unclassifiable. Operating somewhere near the 4AD / Dead Can Dance axis, the music by this fascinating combo is transfixing,...  (1995) » Read more

Catweazle - Ars Moriendi – Just what the world needs, another Swedish prog band! Catweazle are a four-piece of guitar / keyboards / bass / drums with lead vocals by keyboardist Michael Thorne. They seem to be coming from the...  (1996) » Read more

Arto Lindsay - O Corpo Sutil - The Subtle Body – Lindsay has been a fixture of the New York "No Wave" scene and beyond since the early 80s. His most notable projects have been as vocalist and guitarist for The Lounge Lizards (faux-jazz),...  (1997) » Read more

Hardscore - Monkey Trial – This is one of the more bizarre and intriguing things I’ve heard in quite a while. It’s set up as a kind of audio movie with a story about a woman who can talk to animals who has taken a...  (2005) » Read more