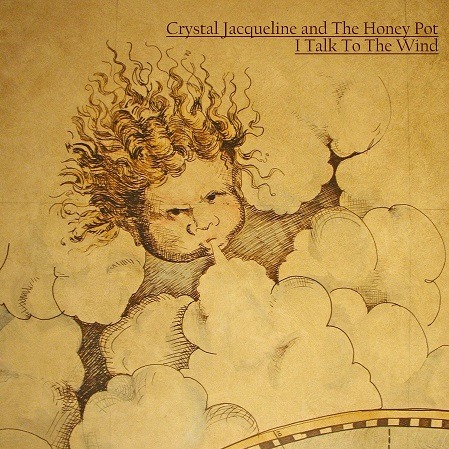 I’ve been delaying gratification on a couple of recent Fruits de Mer releases as I worked through my review queue, which never seems to get any shorter by the way. One of the releases is the latest by Crystal Jacqueline and The Honey Pot, a double 7-inch vinyl release of five cover tunes called I Talk to the Wind. Crystal Jacqueline and The Honey Pot have a long string of releases on FdM and when Keith Jones starts throwing out ideas for possible new covers for them to interpret, both Jacqueline and Icarus Peel get excited and it can get out of hand. And that is how a simple 7-inch single grew to nearly 30 minutes of music crammed into two 33⅓ rpm 7-inch discs. Some of these songs are classics and others obscure. But no matter what, Crystal Jacqueline and The Honey Pot respect the originals while putting their unique stamp on them. The first song is a cover of Traffic’s “Mr. Fantasy.” The long atmospheric trippy intro is totally unrecognizable as the song. And when Jacqueline’s delayed vocals enter along with Mellotron you are in for a treat. I’ve been listening to Traffic’s version for well nigh on 50 years and I have to say that this new version is fantastic! Next is their interpretation of King Crimson’s “I Talk to the Wind.” Jacqueline’s multi-tracked vocal harmonies and Mellotron are simply exquisite. Icarus Peel adds a slightly jazzy guitar lead that completes the picture. They definitely own this song. The third song is a cover an obscure song by Dave Dee, Dozy, Beaky, Mick, and Tich’s 1967 B side to “Zabadak” — “Sun Goes Down.” This is a wild psych cover with drones and wordless singing. When Beaky heard this cover he said “We went quite psychedelic on the “Sun Goes Down,” but the Honey Pot have taken it further down the road with great effect…” The fourth song is a cover of Rare Bird’s “Sympathy.” Starting out with just Jacqueline’s reverbed voice that builds layer upon layer until she bursts out, which just blew me away. “Sympathy” never sounded so good. And the last song is another obscure song, “Dreams” by Tonton Macoute, which led me on a search for the original. Icarus Peel is an ingenious arranger and “Dreams” really cooks with a strong 60s vibe and then at the mid point the band transitions to soft dreamy cosmic gothic psych that eventually disintegrates into a cool psych jam outro. It is quite a bit more aggressive than the original. Crystal Jacqueline and The Honey Pot have firmly established themselves so much so that this release sold out on release in November 2019.